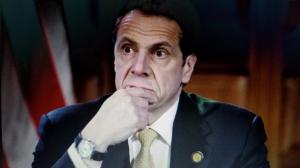 Gov. Andrew Cuomo and Attorney General Underwood are aware that thousands of sexual assaults of the disabled are covered-up

The questions now are why would the Commissioner of DOCCS, OPWDD and the Executive Director of the Justice Center take such illegal actions to put our most vulnerable in direct danger?”
— Michael Carey – Civil Rights & Disability Rights Advocate

ALBANY, NEW YORK, UNITED STATES, September 23, 2018 /EINPresswire.com/ — On top of almost all sexual assaults and rapes of our most vulnerable being covered-up, Governor Cuomo and his agencies are placing convicted sex offenders in these facilities and group homes. The Commissioners of the Department of Corrections and the Office of People with Developmental Disabilities are directly endangering the safety and welfare of incompetent individuals.

The Jonathan Carey Foundation was established by civil rights and disability rights advocate Michael Carey to protect our most vulnerable, which includes all people with disabilities. Thousands of people with developmental disabilities are being sexually assaulted and raped within New York State’s extremely dangerous mental health agencies and group homes and rarely are there ever any criminal prosecutions. The cover-ups are easy because Governor Cuomo has directed the internal reporting and the bypassing of 911 call systems and local police. The State’s MO, if it isn’t documented, it didn’t happen. The cover-ups of sexual assaults and rapes are massive.

Governor Andrew Cuomo is operating his mental health agencies that are rampant with sexual assaults and rape almost identically to the Catholic Church. These illegal practices must be stopped and the officials involved must be criminally charged and indicted.

The three agencies directly involved in this illegal scheme which directly endangers the welfare of incompetent and physically disabled people, a class E felony in New York State are; the Department of Corrections (DOCCS), the Office of People with Developmental Disabilities (OPWDD) and the Justice Center for the Protection of People with Special Needs (Justice Center). The first two agencies are placing the convicted sex offenders and putting people with developmental disabilities at great risk of being sexually assaulted and raped and the Justice Center is guarding these illegal practices. Obviously, everyone knows that placing convicted sex offenders within facilities and group homes with individuals that are developmentally disabled is extremely dangerous and illegal.

The questions now are why would the Commissioner of DOCCS, OPWDD and the Executive Director of the Justice Center take such illegal actions to put our most vulnerable in direct danger? The orders must have come directly from the very top; no one in their right mind can justify these blatant illegal actions. Who would risk their massive salaries to place sex offenders in with people with disabilities unless they were forced to do so?

Here are the heads of these three New York State agencies;

Kerry A. Delaney is the Acting Commissioner of the New York State Office for People With Developmental Disabilities (OPWDD). In this role Ms. Delaney heads one of New York State’s largest agencies, with a mandate to provide services and supports to more than 130,000 people with intellectual or developmental disabilities…
There are distinct reasons why these individuals have still not been confirmed by the New York State Senate and have been acting Commissioners for years.

Denise Miranda is the Executive Director of the NYS Justice Center for the Protection of People with Special Needs. Thousands of reported sexual assaults and rapes of people with disabilities are reported to this fraudulent and extremely corrupt State agency and almost all are covered-up. Miss Miranda is running an agency that systematically obstructs justice, discriminates and violates the civil rights of people with special needs and protects countless sexual predators. The Justice Center has told a 75 year old mother who has fought ferociously to keep a sex offender from being moved from a maximum security prison into her son’s group home that they could do nothing.

Governor Cuomo and his administration are out of control and appear to have no regard for the safety or equal rights of 1,000,000 New Yorkers with disabilities. It is time for the top officials involved in these criminal cover-ups of rapes and deaths and the placement of sex offenders with the disabled which are civil rights atrocities to be indicted and held fully accountable for their crimes.

If you would like to help advocate and protect our most vulnerable and help fight to end this extreme corruption, please consider making a tax deductible gift to the Jonathan Carey Foundation. Thank you.

The incredible life and tragic preventable death of Jonathan Carey, who was disabled, had autism, was non-verbal & only 13 when he was killed by his caregivers