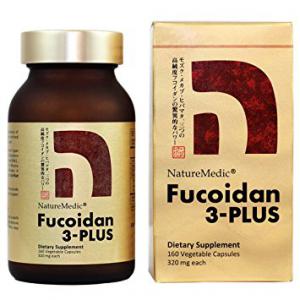 The immune system is actively finding ways to prevent viruses, bacteria and infected cells from affecting our health.

Besides the ability of Fucoidan (Mekabu, Mozuku and Fucus) to enhance the immune system naturally, they are also able to produce higher antibody titers against all three strains of influenza. ”
— Dr. Susana Trujillo

NEW YORK, NY, UNITED STATES, January 31, 2019 /EINPresswire.com/ — When our immune system is weak, some viruses can "hide" inside certain cells in our bodies and avoid being totally removed by the immune system. Some viruses can do this for a long time.

The best flu prevention strategy is basic — good nutrition (including taking natural health supplements), regular exercise, and enough sleep. You can also wash hands frequently and avoid people who have the flu. Still, it's hard to prevent contact with microorganisms (germs). Therefore, the best way to prevent the flu and other diseases is by keeping yourself healthy.

Flu is an infectious respiratory illness caused by influenza viruses that infect the nose, throat, and sometimes the lungs. It can cause mild to severe illness, and at times can lead to death.1 Some of the symptoms caused by Influenza (a viral infection) are fever, chills, sore throat, muscle aches, and cough that lasts a week or more.1 People commonly use the term "flu" to define any kind of respiratory or gastrointestinal illness, such as colds or diarrhea and vomiting that resemble “influenza-like-illness” (ILI) symptoms. However, influenza usually associated with more severe illness and lasts longer than the common cold and, normally, influenza does not cause vomiting or diarrhea in adults.2

Because influenza viruses are constantly mutating and there are different strains and subtypes that are prevalent among human populations from year to year, outbreaks and epidemics occur in certain geographical areas or countries. Occasionally, an influenza strain will emerge to cause an influenza pandemic that spreads globally and is usually associated with more severe disease and increased mortality.6

Most people recover from influenza without any complications and develop immunity to future infection with the same strain or a related influenza strain that may prevent illness symptoms or make illness less severe.10 However, there is an increased risk for serious complications and death for the elderly and those with compromised immune systems or who are suffering from diabetes, kidney dysfunction, heart disease, and other chronic health issues.8

The single best way to prevent seasonal flu is to adapt good health habits like covering your cough and washing your hands often can help stop the spread of germs and prevent respiratory illnesses like the flu.9 There also are natural health supplements like Fucoidan with antiviral properties that can be used to treat and prevent the flu. The different types of Fucoidan (Mozuku, Mekabu and Fucus) offer the nutrients you can take to protect yourself and others from flu and help stop the spread of germs.

In relationship to the nutritional health supplements that can help you prevent the flu, one of the most studied brown seaweeds is Mekabu, which contains Fucoidan a sulfated polysaccharide extracted from the sporophylls of the edible seaweed (U. pinnatifida)11 and long used as a traditional food in Japan, has attracted attention as an agent that enhances immune function because various types of Fucoidan reportedly have physiological activities such as antiviral, anti-inflammatory, anti-angiogenic, anticoagulant, and antitumor effects.12 For virus infection in mice, oral administration of Mekabu Fucoidan increased neutralizing antibody production in the mucosa and blood and inhibited viral growth. At the same time, Mekabu Fucoidan also demonstrated to enhance immune function through mechanisms involving natural killer (NK) cell activation and increased production of IFN-γ and IL-12 in animal studies.11 The WHO announced a new influenza pandemic on 11 June 2009.13 Three influenza pandemics (Spanish, Asian, and Hong Kong) in the 20th century, and more recently the extremely pathogenic avian influenza (H5N1) with high lethality reported in Hong Kong in 1997, indicate that humans have long been facing influenza threats. The emergence of new influenza viruses and human epidemics is now recognized as a serious global health problem.13

One study from the Mukogawa Women’s University in Japan reported that their study “showed a possible adjunctive role of Mekabu Fucoidan in antibody production in the elderly, although further studies on the underlying immunomodulatory mechanisms are needed.”14

Recent studies focused on antiviral compounds obtained from natural resources. Many extracts from brown seaweeds have been isolated and tested for pharmacological purposes, and their antiviral activity has been demonstrated in vitro and in vivo. Fucoidan is a sulfated polysaccharide present in the cell wall matrix of brown algae that has been demonstrated to inhibit certain enveloped viruses with low toxicity. One important study evaluated the potential antiviral activity and the mechanism of action of fucoidan from Cladosiphon okamuranus against Newcastle Disease Virus (NDV0 in the Vero cell line.

In conclusion, besides the ability of Fucoidan (Mekabu, Mozuku and Fucus) to enhance the immune system naturally, they are also able to produce higher antibody titers against all three strains of influenza. The immune system is compromised in people with a weak immunity, still there are healthy habits like taking Fucoidan on a daily basis that can be adapted to be healthier and to avoid getting sick too often.