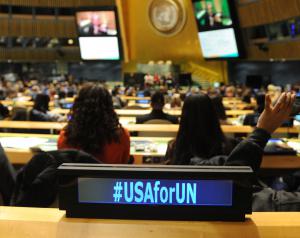 With the theme #USAforUN, the Summit attracted large numbers of youth participants. (Photo courtesy of the UNA-USA) 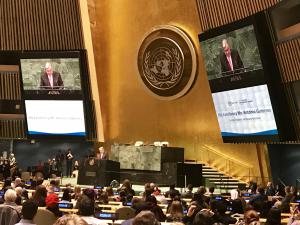 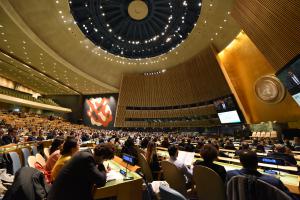 Even as the most powerful country in the world, we can accomplish a great deal more when we partner with other countries rather than go it alone.”
— U.S. Representative Eliot Engel (D-NY)

WASHINGTON, DISTRICT OF COLUMBIA, UNITED STATES, February 28, 2019 /EINPresswire.com/ — A historic number of Americans–including a delegation from Youth for Human Rights International—showed their support for the peace and global engagement at the United Nations Association of the United States of America's (UNA-USA) annual Global Engagement Summit at UN Headquarters in New York City in February, 2019. The Summit was opened by United Nations Secretary-General, H.E. Mr. António Guterres. With more than 1,800 global activists in attendance, the Global Engagement Summit was one of the largest assemblies of Americans gathered in support of the UN goals.

The convening took place at a pivotal moment for the world and for the U.S.-UN relationship. The planet is facing the worst humanitarian and refugee crisis since World War II. Human rights violations, human trafficking, terrorism, and threats from the effects of climate change are a concern for the global community.

“There are many human rights issues that must be addressed within the United States and around the world such a human trafficking, education and addressing discrimination in all its forms, “said Erica Rodgers, National Director of Youth for Human Rights International who attended the summit. “In order to address these problems I feel we must make further efforts to encourage schools and institutions everywhere to better educate citizens on the rights listed in the Universal Declaration of Human Rights and the UN’s functions to promote peace. An increased understanding of basic human rights would assist in addressing these issues as a whole.”

While political leaders may be in disaccord, research shows that American voters registered in both major parties agree that sustained U.S. leadership at the UN is vital. A nationwide poll released last month by the Better World Campaign stated that 83% of Americans believe it is better for the U.S. to work with allies and international organizations than going it alone. This sentiment was furthered by U.S. Representative Eliot Engel (D-NY) when he addressed the group at the Summit and said, “Even as the most powerful country in the world, we can accomplish a great deal more when we partner with other countries rather than go it alone.”

Ms. Rodgers, after attending the Summit said, “The protection of human rights was fundamental in the founding of the United States over 200 years ago. The promotion of human rights is an important national interest to the United States. One duty of the U.S. Department of State is to ‘Hold governments accountable to their obligations under universal human rights norms and international human rights instruments’ and to ‘Promote greater respect for human rights, including freedom from torture, freedom of expression, press freedom, women's rights, children's rights, and the protection of minorities.’ This is why the U.S. must lead the way though human rights education. The U.S. must increase education on the Universal Declaration of Human Rights and the history of the United Nations. This should be taught in our school classrooms as a part of each states curriculum to promote peace and tolerance at home and abroad.”
Youth for Human Rights continues to promote the UN Declaration and offer free educational materials to schools and organizations to better promote human rights for everyone – everywhere.

About the UNA:
The Global Engagement Summit is hosted by the United Nations Association of the USA (UNA-USA) and included Americans from 45 states, Washington, D.C., and Puerto Rico. The United Nations Association of the USA (UNA-USA) is a grassroots movement of Americans who support the vital work of the United Nations in U.S. communities, colleges, and Congress. For more than 70 years, UNA-USA and its national network of 20,000 members and 200 Chapters have promoted strong U.S. leadership at the UN through advocacy campaigns, youth engagement, outreach programs, and public events.

About Youth for Human Rights:
Youth for Human Rights International (YHRI) is a nonprofit organization founded in 2001 whose mission is to teach youth about human rights, specifically the United Nations Universal Declaration of Human Rights (UDHR), and inspire them to become valuable advocates for tolerance and peace. YHRI teaches human rights education both in the classroom and in nontraditional educational settings such as through art series, concerts and other interactive community events. Their most recent campaign has included #KnowYour30 with the deliberate purpose of increasing awareness of the Universal Declaration of Human Rights list of the 30 human rights every person has – and how these become interwoven into everyday life. To learn more go to https://www.youthforhumanrights.org or watch
https://www.scientology.tv/series/voices-for-humanity/mary-shuttleworth.html You can also register for our upcoming U.S. National Human Rights Conference by going to: https://www.eventbrite.com/e/us-national-human-rights-conference-working-to-stop-human-trafficking-tickets-53447391587