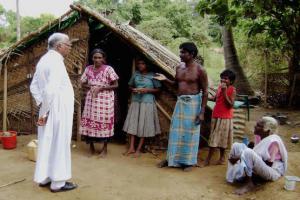 Typical house, the Tamils Live After the War

The UNHRC should call on the countries who had supported the war against Tamils in 2009 and ask them to compensate the amount of one million dollar per family.

NEW YORK, USA, March 18, 2019 /EINPresswire.com/ — US Tamils sent the following letter to the UNHRC member states to urge "UNHRC Should Pass Resolution to Help Tamils Financially Who Lost Their Relatives Due to Sri Lankan Killings & Abductions."

Here is the Letter:

Re: UNHRC Should Pass Resolution to Help the Tamils Financially Who Lost Their Relatives Due to Sri Lankan Killings or Abductions.

Most of the Tamils who are missing or killed were heads of family or able-bodied young adults. They are the only able people who can earn money to support their family.

These Tamil parents and other Tamils are suffering tremendously. They have no shelter or housing, no jobs, no income, no protection and are vulnerable to Sri Lankan military sexual assaults, especially in the Vanni.

These Tamils are living in huts without proper roofs or walls. In many places there is no drinking water and many of these Tamils are wasting away in interim camps because Sri Lankan army took their homes and lands.

They are already overcome with worry, suffering from their missing or loss of their loved ones. Further suffering from injury, sexual violence, malnutrition, illness, and disability are some of the most serious physical threats, while there is also the emotional suffering of post-traumatic stress disorder (PTSD), depression, and anxiety.

If we allow these Tamils to continue to live in such horrific conditions, soon they will die.

This is the tactic that the Sri Lankan government is using, so that fewer Tamil people are left who are witnesses of the Sri Lankan massacre, fewer to complain about their missing relatives to international communities, and soon none.

The UNHRC should call on the countries who had supported the war against the Tamils in 2009 and ask them to compensate those families who lost or are missing members the amount of one million dollar per family.

According to Stanford University studies, the value of a human is worth $1.8 million, but we are asking for only one million.

This money should be distributed to Tamils by a credible international organization, ideally from the west, not by the corrupt Sri Lankan government.

If the money given to Sri Lanka, they will force the relatives of the missing to accept the death certificate. This would eliminate the problem without justice and closure. This is what the office of Missing People (OMP)is is trying to achieve with offering 6000 rupees, which is approximately US $30.

This is an urgent appeal. Please pay attention to these Tamil victims of the Sri Lankan ethnic war. These sacrifices should not be in vain. We hope the UNHRC will do the right thing and continue to be a relevant international organization that cares about justice.