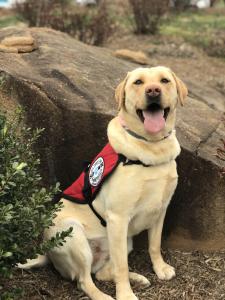 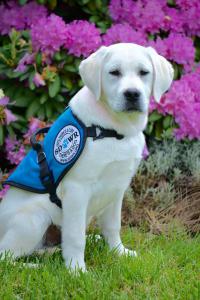 Service Dogs by Warren Retrievers, or SDWR, is based in Madison, Virginia

Brian, a 16-year-old boy in Centerburg, Ohio, received a very special delivery today of his very own Diabetic Alert Service Dog from SDWR.

CENTERBURG, OH, UNITED STATES, March 31, 2019 /EINPresswire.com/ — Brian, a 16-year-old boy in Centerburg, Ohio, received a very special delivery today of his very own Diabetic Alert Service Dog from Service Dogs by Warren Retrievers. Based in Madison, Virginia, Service Dogs by Warren Retrievers, or “SDWR,” has a mission to provide specially-bred and trained dogs for people of all ages that struggle with living with invisible disabilities such as Autism, PTSD, Seizure Disorders, or in the case of Brian—Type 1 Diabetes. SDWR has hundreds of working service dogs placed around the globe and is currently serving approximately 1,000 families.
Kami, a labrador retriever Diabetic Alert Dog, has already received countless hours of training through SDWR’s service dog raiser program where volunteers raise puppies in training for approximately one year. The dogs and raisers must follow through the foundation and skill set training provided through SDWR trainers at the facility in Virginia.
Kami is also an honored graduate of the SDWR Fallen Officer Puppy Program. The Fallen Officer Puppy Program, also known as “FOPP,” is an initiative by SDWR to pay respect to the legacy of service by fallen American police who sacrificed their lives in the line of duty. Kami is named in honor of fallen hero Police Officer Robert Kaminski of the New York City Police Department who died as a direct result of illnesses he contracted after inhaling toxic materials as he participated in the rescue and recovery efforts at the World Trade Center site following the terrorist attacks on September 11, 2001. Kami’s work as a Diabetic Alert Service Dog with Brian will carry on in memoriam of Officer Kaminski’s life of service before self.
Brian was diagnosed with Diabetes when he was 13-years-old. Brian hopes that a service dog will be able to alert him when he is sleeping and in between checks. Brian is Type 1 Diabetic and is insulin dependent. Brian needs to be able to live independently to be able to go away to college but is a very deep sleeper and does not wake up to his Dexcom alarms overnight. He attends many campouts and outings as an active teen and believes having a service dog will help alert of blood sugars. A service dog able to get help if needed would help give Brian’s family the much needed peace of mind. Brian monitors his blood sugars 24 hours a day to stay alive. If his BG is too high, he needs to take a corrective does of insulin. If his BG is too low. he needs to have a fast acting glucose. Not keeping his blood sugars in a healthy range can cause further damage to his body and/or lead to death. Brian is optimistic that with the addition of a service dog it will help make his life a little easier and provide a sense of independence and security.
SDWR uses a proprietary scent training method to teach Diabetic Alert Dogs to detect fluctuations in blood sugar that fall outside of a handler’s healthy range. Since Kami is a service dog and covered under laws in accordance with the Americans with Disabilities Act, he will be able to accompany Brian everywhere—from church, to the grocery store, even camping.
During the upcoming 18 months, SDWR will return to Brian’s home every 3-4 months to continue working on Kami’s customized training, follow up training and training the human to make a successful team and public access certification. This certification can only be given to Brian after a progression of hard work and dedication to the SDWR training program. This training program is what sets SDWR apart from other nonprofit service dog organizations.
Service Dogs by Warren Retrievers is a nonprofit organization based in Madison, Virginia, and relies on donations to help the organization in its mission, “Until there’s a cure…there’s a dog.” To make a donation or learn more about SDWR, please visit the website, www.sdwr.org. To learn more about Diabetic Alert Service Dogs visit www.sdwr.org/service-dogs/diabetic-alert/. To learn more about SDWR’s Fallen Officer Puppy Program visit www.sdwr.org/fallen-officer-puppy-program/.