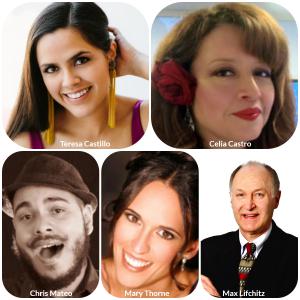 North/South Consonance marks the Cinco de Mayo with a free-admission concert featuring arias and arts songs by composers from Mexico and the Americas.

The widely celebrated Mexican holiday commemorates the May 5, 1862 victory of the Mexican army over the invading French forces of Napoleon III in a battle that took place in the outskirts of the city of Puebla. The Mexican soldiers were under the command of Benito Juarez, Mexico's first indigenous president.

The event will take place at the intimate but acoustically superior auditorium of Christ & St Stephen's Church (120 West 69th Street) on Manhattan's Upper West Side. The free-admission event will start at 3 PM and end at approximately 9:30 PM. The auditorium is ADA accessible. No tickets or reservations needed.

Hailed by the San Francisco Gate for her vocal “power and florid elegance”, soprano Teresa Castillo made her Carnegie Hall debut last season appearing as soloist with the New England Symphonic Ensemble. She earned first prize in the Lois Alba Aria Competition, and the Anita Cerquetti International Opera Competition and received career grant from Career Bridges New York and the Anna Sosenko Trust.

Celia Castro, soprano, won the NYSTA Young Artists Competition as well as the Clarisse Kampel Foundation Prize, and has appeared in copious opera and zarzuela productions throughout New York City, Puerto Rico and the Dominican Republic. She has also participated in concerts sponsored by the Caramoor Festival Bel Canto Program and the Association of Dominican Classical Singers.

Soprano Mary Thorne has been praised by the press as an “engaging soloist, bright and agile” and for her “knowing sexiness, effortless coloratura runs and solid acting skills.” She has appeared with the Amore and Amato Opera companies, Hubbard Hall Opera Theater, the Bronx Opera, Opera Company of Brooklyn, and New York Metro Vocal Arts Ensemble.

Chris Mateo, countertenor, has appeared as soloist with the Heavenly Vision Christian Center Choir, the Symphony Chorus of New York and the Bar City Chorus. A native of the Dominican Republic where he started his career, Mateo graduated with top honors from CUNY's City College. Also active as a fashion designer, Mr. Mateo is also an alum of the Fashion Institute of Technology.

Active as composer, pianist and conductor, Max Lifchitz was awarded first prize in the 1976 International Gaudeamus Competition for Performers of Twentieth Century Music held in Holland. The San Francisco Chronicle described him as "a stunning, ultra-sensitive pianist" while The New York Times praised Mr. Lifchitz for his "clean, measured and sensitive performances.” The American Record Guide referred to him as “…one of America's finest exponents of contemporary piano music."

Since its inception in 1980, the North/South Consonance, Inc. has brought to the attention of the New York City public over 1,000 works by composers hailing from the Americas and elsewhere representing a wide spectrum of aesthetic views. Its activities are made possible in part, with public funds from the New York State Council on the Arts and the New York City Department of Cultural Affairs as well as the generosity of numerous individual donors.

Listen to the North/South Chamber Orchestra

To stream, download and/or purchase the more than 60 compact discs released by the
North/South Recordings label
please go to