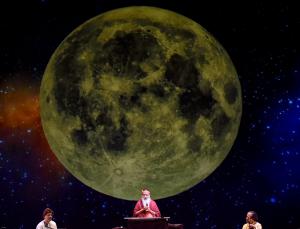 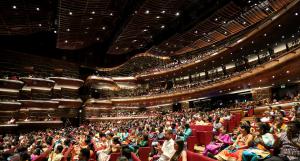 Packed auditorium of the Dubai Opera enjoys the tunes of healing 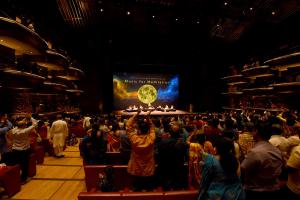 Music is my language, music is my expression and music is my religion”
— His Holiness Dr. Sri Ganapathy Sachchidananda Swamiji

Music has its therapeutic and soothing effects on all beings. Proven and powered by His own research for over four decades on the healing effects of music, His Holiness Dr Sri Ganapathy Sachchidananda Swamiji, pontiff of the Avadhoota Datta Peetham, Mysuru, India, conducted a divine concert of music for meditation and healing on the 19th Apr 2019 at the iconic Dubai Opera. The concert was enjoyed by the packed audience and the tunes played were explained for their alignment with the natural elements, the nerve centers they positively impact and the potential benefit to the various body organs.

A composer par excellence and a musician Himself, Sri Swamiji played His own tunes on the Roland synthesizer to the mellifluous accompaniment by the guest artistes and the Celestial Message troupe viz., renowned violinist, Nada Chakravarti Dr. L Subramaniam, Tabla maestro Nada Nidhi Pt. Anindo Chatterjee along with Vidwan Sri V Suresh on Ghatam along with Vid Jaitra Varanasi on violin, Vid. Shankar Ramesh on Mridangam and Sri Mani on keyboard. His Holiness gave an opportunity for the attendees to enjoy the finesse of the different percussion instruments of India towards the end of the concert where the ensemble delivered the beat feast.

His Holiness Sri Ganapathy Sachchidananda Swamiji is world renowned for His Healing and meditation music and has conducted hundreds of music concerts all over the world in many of the prestigious venues including the Sydney Opera House, Australia, the Lincoln Center in New York City, USA, The Esplanade in Singapore and Royal Albert Hall in London, UK.

According to Sri Swamiji, the benefits of music therapy are many including relief from pain and discomfort, reduction of stress, improved coping, strengthened immune system, self-empowerment during treatment, strengthened family bonds, continued developmental growth, improved patient and family satisfaction and spiritual advancement. In addition, Sri Swamiji’s healing music is utilized in large hospitals to accelerate the post-operative recovery and in intensive care units. Preliminary experiments to study the influence of Sri Swamiji's music on State police personnel showed an improved behavior with plaintiffs, reduced job stress and improved sense of well-being. When Sri Swamiji’s music was played in prisons, an improvement in convicts’ behavior with co-habitants and better social consciousness was observed. Sri Swamiji’s music is used by the Department of Psychiatry, University of Arkansas for Medical Sciences to improve the mental health of patients.

Sri Swamiji’s Nada Yoga Research Center in Mysore, India is a state of the art facility, which provides the experience of individualized healing sessions in a precisely calibrated environment with computer controlled piped music. A comprehensive compilation on Sri Swamiji’s approach to music and music therapy explaining the various facets of Sri Swamiji’s concept and therapy process is published in the name of ‘Raga Ragini Nada Yoga’.

Based in Mysore, Sri Swamiji has established many ashrams to spread the message of peace around the world. Sri Swamiji supports several social projects to help the downtrodden including hospitals and schools in India to help the poor and needy. People around the world have received immense benefit from physical healing to spiritual guidance through His music therapy. Sri Swamiji’s work often appears in newspapers and periodicals around the globe.