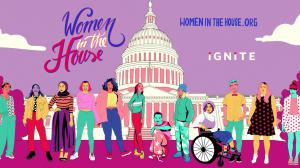 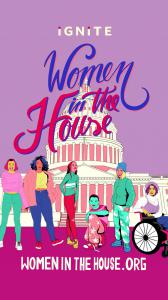 OAKLAND, CALIFORNIA, USA, April 24, 2019 /EINPresswire.com/ — Today, nonpartisan 501(c)(3) IGNITE and creative agency Pereira O’Dell, in collaboration with Heavy Duty Projects and MediaMonks, announce the launch of #WomenInTheHouse, a social action that celebrates the record number of women in office with the objective of encouraging young women to pursue political careers.

“As our country pushes towards a future of equal representation, we saw the opportunity to tap into the influential and powerful market of young women to show them, no matter their affiliation, they have what it takes to use their voice as elected leaders to make a difference in not only America, but the world,” said Dr. Anne Moses, IGNITE's Founder & President.

Building off the momentum of this congressional session, where a record number of congresswomen are serving in the House of Representatives, IGNITE has created an interactive website that continues the positive momentum. Using a quiz, users can uncover similarities between themselves and current female members of the House of Representatives. This feature helps more women see the similarities between themselves and elected officials.

Visitors of the #WomenInTheHouse website also can see a live feed of aggregated posts using the hashtag, accelerating visibility.

“As music is a uniting factor for all people, no matter their background, race, or political stance,” said PJ Pereira, Creative Chairman of Pereira O’Dell. “The original lyrics created for #WomenInTheHouse serve as an anthem to unite and empower young women nationwide celebrate our current successes and drive us into a future of equal representation.”

The music video showcases animated versions of the artists alternating with a diverse portrait of women singing the song.

"This is both a celebration and a call to action, a rousing mix of music, animation and digital distribution to put forward a positive message everyone can get behind. It's been great to work with such amazing partners to get this message out the door, and a great way for our team to show their support," adds Wesley ter Haar, COO of MediaMonks.

About IGNITE:
IGNITE is a national movement of young women who are ready and eager to become the next generation of political leaders. As a nonpartisan 501c3, IGNITE builds political ambition in high school and college-aged young women in their own communities. IGNITE provides civic education, exposure to women in political leadership, hands-on training, work opportunities, and a peer network of women who support and nurture each other’s aspirations for civic and political leadership. Leading up to 2020, IGNITE will train 50,000 young women across the country. Participation in the IGNITE program has tripled since the 2016 election, with more than 5,000 young women across party lines being trained by the end of this academic year. www.ignitenational.org

About Pereira O’Dell:
Pereira O’Dell (www.pereiraodell.com) is an award-winning advertising agency with offices in New York and San Francisco that combines techniques from traditional advertising, digital, PR and design to create innovative campaigns, programs, and products that are in sync with how

consumers behave today. The agency has been listed on the Ad Age A-List several times since 2014 and, in 2015, was named by Fast Company as one of the 10 most innovative companies in advertising. The Pereira O’Dell client roster includes MINI, Adobe, General Mills, Jet.com, Timberland, Fifth Third Bank, Intel, Realtor.com, Memorial Sloan Kettering Cancer Center, Rover.com, European Wax Center, and the Museum of Natural History.

About MediaMonks:
MediaMonks is a global creative production company that partners with clients across industries and markets to craft amazing work for leading businesses and brands. Their integrated production capabilities span the entire creative spectrum, covering anything you could possibly want from a production partner, and probably more.

From creative campaigns and content to bespoke development and design, MediaMonks works above the line and below the fold at the intersection of creativity and technology. Operating across teams, time zones, and technologies with an incredible in-house team of 950+ Monks. Their work is recognized by advertising and craft awards around the world, producing 128 Cannes Lions and 220+ FWAs to date.

In July 2018, MediaMonks joined forces with S4Capital to build out the production platform of the future. Under the direction of Sir Martin Sorrell, MediaMonks is increasing its firepower on all fronts, adding new Monks, monasteries, and services such as data analytics and digital media buying.