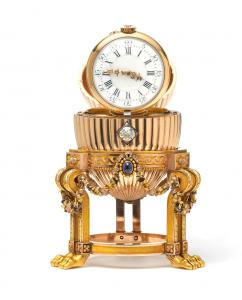 Jewelry expert Joseph DuMouchelle offers a closer look at increasing demand for vintage signed jewelry at auction in the U.S. and globally.

DALLAS, TEXAS, USA, April 24, 2019 /EINPresswire.com/ —
In much the same way that fine art is signed by artists, quite often, so is exceptionally well-made jewelry, with signed pieces marked with a signature which denotes the designer, maker, or manufacturer. Particularly desirable among vintage pieces, demand for signed jewelry at auction has never been higher, according to experienced jeweler and qualified gemologist Joseph DuMouchelle.

Easily identified by experts such as DuMouchelle, styles of signature or means of marking signed jewelry can vary, particularly with vintage pieces. "With the appropriate magnifying glass, known as a loupe, it's possible to both identify a signature and to get a valuable, closer look at a particular piece of jewelry," he explains.

While looking for a signature, there's also the opportunity to look for other, interesting hallmarks, such as whether the piece is 18k or 24k gold, for example, according to DuMouchelle. "Learning to read different, particularly vintage signatures is an excellent way to give oneself the upper hand in dealing with vintage jewelry," adds the expert and Joseph DuMouchelle Fine & Estate Jewellers co-founder.

From vintage Cartier art deco brooches to 1960s diamond-embellished Tiffany rings, pieces of vintage signed jewelry are today commanding higher prices than ever before at auctions throughout the United States and around the world. "Prewar, postwar, and mid-century pieces of signed jewelry from top brands and designers have become increasingly sought-after in the last decade," DuMouchelle explains, "both here in the U.S. and internationally."

"Demand only looks set to increase from here on out," suggests DuMouchelle, wrapping up, "so there's never been a better time to buy or, arguably, sell vintage signed jewelry, particularly at auction."

A member of the international board for the Gemological Institute of America Alumni Association and former head of the Accredited Gemologists Association, Joseph DuMouchelle is co-founder and president of Joseph DuMouchelle Fine & Estate Jewellers, LLC. Established over a decade ago by DuMouchelle and his partner, Melinda 'Lindy' Adducci, the business now boasts locations in New York, Michigan, and Florida. As an international auction house, Joseph DuMouchelle Fine & Estate Jewellers holds vintage diamond, signed jewelry, and timepiece auctions year-round, selling to clients in more than 80 countries worldwide. Experts in vintage signed jewelry and rare, colored stones, the business has also successfully handled and sold unique pieces from major collections and belonging to famous individuals including Marla Maples and Nat King Cole.