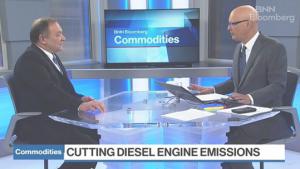 Global demand potential for dynaCERT's HG technology is in the multi-millions of units, able to reduce NOx in emissions from diesel engines by 88%, among other.

By using both synthetic fuels and dynaCERT's HG Technology John O'Bireck anticipates a reduction of greenhouse gasses from his 10 vehicles to total ~700 tonnes annually.”
— Follow The Money Interview of dynaCERT Inc. Advisory Board Member

NEW YORK, NY, UNITED STATES, April 30, 2019 /EINPresswire.com/ — dynaCERT Inc. CEO, Mr. Jim Payne, was interviewed on Bloomberg BNN on April 23, 2019, discussing how the company's carbon-cutting HydraGENTM (HG) technology is being used in diesel engines used for trucking, marine shipping and mining. The full interview may be viewed at https://www.bnnbloomberg.ca/video/power-shift-canadian-technology-used-to-cut-diesel-engine-emissions~1666260 online. dynaCERT was also discussed in a recent interview with Mr. John O’Bireck, an engineer highly knowledgeable in the field dynaCERT specializes in, he is also a highly successful serial entrepreneur, and a recent addition to dynaCERT's advisory board. Below are takeaways of insight from both interviews.

1) Takeaways of insight from the Bloomberg BNN interview of the CEO:
dynaCERT IS NOW GROWING GOLBALY: in North America, Europe, Middle East, and India — dynaCERT has transport trucks and buses currently running in India with the government running a pilot project.

EMISSIONS REDUCTION TECHNOLOGY: The HG technology is proven through the German Government to reduce NOx by 88%, across the board dynaCERT is reducing pollutants on average north of 50%. The HG technology acts as a catalyst; hydrogen has a 9 to 10 times flame spread which helps the engine burn diesel more completely, resulting in more power, less carbon fouling, and a reduction in pollutants.

TECHNOLOGY THAT PAYS FOR ITSELF: The HG technology improves fuel economy on average 10% – 15%. Typically the HG unit costs just over $8,000 to the end user for a transport truck, resulting in a typical payback period of less than one year from fuel savings alone.

NEW EXPANSION INTO MINING INDUSTRY, HEAVY MACHINERY, POWER GENERATION, and BUSSES: dynaCERT makes HG units of various sizes tailored for unique specifications. dynaCERT just launched into the mining industry; two major mining companies have placed orders for units for their large diesel trucks, and dynaCERT has recently signed a deal with an OEM that manufactures underground mining equipment and whose primary focus is to reduce emissions. Although the initial focus has been transport trucks, dynaCERT is also now involved in making HG units for heavy equipment, and power generation; dynaCERT has HG units running in big power plants in Northern Quebec, and Saudi Arabia. dynaCERT is servicing two major bus companies in India that are provincially owned.

EUROPE'S THIRST FOR EMISSION SOLUTIONS: dynaCERT has spent over a year having its product tested, verified, and certified through TUV North and TUV South in Germany. dynaCERT is now waiting for the final stamp of approval from KBA. dynaCERT has pilot projects on right now with the government of Austria where they are running equipment and have received a commitment that upon just emission reductions they are committed to outfitting their entire fleets.

CARBON CREDIT MONETIZATION: The HG technology is unique to dynaCERT and protected by various patents, the system is fully computerized and is able to monitor and monetize carbon credits. dynaCERT is in the process of getting certified for carbon credits through the UK. CEO, Jim Payne, stated "It's taken us 15 years and $40 million years to get here. It certainly has not been an easy feat."

dynaCERT AT THE BEGINING OF MAJOR GROWTH CURVE TRAJECTORY: At the close of the interview the BNN host noted dynaCERT was publicly traded and asked "are you profitable at this point?", to which the CEO stated "Currently, we are not, like I said; we have just gone into sales, we certainly expect that by later this year we will start turning a profit".

2) Takeaways of insight from the Mr. John O’Bireck interview:
The full interview may be viewed at https://youtu.be/42rzzi3p2gE online, the dynaCERT discussion begins near the 7 minute mark.

John O'Bireck understands hydrogen enhanced combustion technology on a technical level very well. John has purchased 10 of dynaCERT's units for his own fleet. He is able to quantify the results under constant variables (e.g. same route, same driver, same load), and the HG technology comes with greenhouse gas tracking software. By using both synthetic fuels and dynaCERT's HG Technology he anticipates a reduction of greenhouse gasses from his 10 vehicles to total ~700 tonnes annually.

The following URLs have been identified for further DD on dynaCERT:

Mid-February 2019 interview with dynaCERT Inc. CEO:
https://jaytaylormedia.com/media/taylor20190205.mp3
(the interview of dynaCERT's CEO begins at the with ~17:30 min. mark of the above mp3)

This release may contain forward-looking statements regarding future events that involve risk and uncertainties. Readers are cautioned that these forward-looking statements are only predictions and may differ materially from actual events or results. Content found herein are for information purposes and are not solicitations to buy or sell any of the securities mentioned.