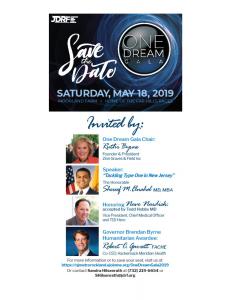 Donations from One Dream Gala will go toward funding research

â€śWhen JDRF informed us the stadium had a scheduling conflict and JDRF was left without a venue, something had to be done,â€ť ”
— W. Rodman Ryan

BRIDGEWATER, NEW JERSEY, USA, May 13, 2019 /EINPresswire.com/ — When Metlife Stadium recently informed the New Jersey Metro and Rockland County chapter of JDRF that it couldnâ€™t hold its annual One Dream fundraiser at the stadium, as it had in 2018, the organization seemed to have a gala without a home. Enter perennial sponsor and JDRF supporter, Open Road Auto Group. The company offered a possible solution. The result â€“ this yearâ€™s JDRF gala will be held on May 18 at the famed Moorland Farm in Far Hills, New Jersey.

For nearly a century, Moorland Farm has been the home of the premier social and sporting event, the Far Hills Race Meeting, also known as â€śThe Hunt.â€ť This is the first time Moorland Farm is opening its gates to the type 1 diabetes (T1D) community for one of the organizationâ€™s most important annual events. What â€śThe Huntâ€ť and the JDRF Foundation have in common is the active support of Open Road Auto Group.

The Open Road commitment to JDRF began when company President Michael Moraisâ€™ son Jack was diagnosed with Type 1 diabetes, and since 2015, the organization and its employees have generated more than $1 million to support JDRFâ€™s vision to create a world without T1D.

â€śWhen JDRF informed us the stadium had a scheduling conflict and JDRF was left without a venue, something had to be done,â€ť explains W. Rodman Ryan, Open Road Auto Group Chairman and CEO. â€śWe have also been longtime supporter of the Hunt in Far Hills, so we thought there might be a solution.â€ť

Ryan approached the Co-Chairmen of the Far Hills Race Meeting Association, Guy J. Torsilieri and Ronald A. Kennedy, as well as Far Hills Mayor Paul Valone and the town council about hosting the JDRF gala. â€śWithout their help, Moorland Farm wouldnâ€™t have been an option,â€ť said Ryan.

Instead of a stadium setting, guests at this yearâ€™s event will experience the lush pastoral Moorland Farm setting in Somerset County. With more room, patrons can spread out and enjoy an incredible sunset view throughout the cocktail hour and dinner program.

The One Dream Gala is an elegant black tie optional fundraising event known for its entertainment, hospitality, and, in the words of event organizers, an â€śuplifting spirit that leaves guests moved and inspired.â€ť The attendees will gather for cocktails, a formal seated dinner, silent and live auctions, entertainment, and Fund A Cure, in which money is raised specifically for research projects.

Raffle tickets will be sold during the cocktail reception at $500 per ticket or $1,000 for three tickets. The winner of the Golden Ticket raffle will take home their choice of a live auction item which could be valued at over $25,000.

Presently, there is no known cure for Type 1 Diabetes. According to JDRF International, â€śType 1 diabetes (T1D) is an autoimmune disease that occurs when a personâ€™s pancreas stops producing insulin, the hormone that controls blood-sugar levels. T1D develops when the insulin-producing pancreatic beta cells are mistakenly destroyed by the bodyâ€™s immune system. The cause of this is still being researched, however scientists believe the cause may have genetic and environmental components.

The Open Road Auto Group is the Tri State's largest new and pre-owned vehicle retailer specializing in top automotive brands for the New York-New Jersey Metropolitan Area. It is known for providing Its customers with a "Five-Star Customer Service Experience" for each and every new or pre-owned vehicle leased, purchased or serviced. Open Road currently owns and operates over 25 automotive facilities including 18 dealerships throughout the New York-New Jersey metropolitan area representing Acura, Audi, BMW, Cadillac, Chevrolet, Honda, Mazda, Mercedes-Benz, MINI, Subaru and Volkswagen. It has been ranked as the 15th largest automotive group in the nation by Automotive News.