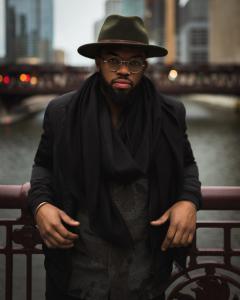 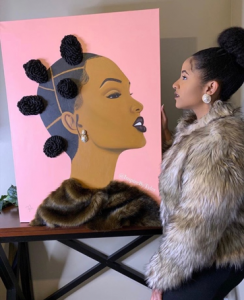 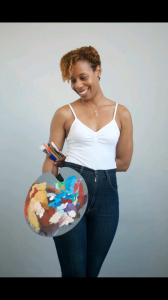 Artists to exhibit at Gold Coast Art Fair in June

We continue to be delighted by the depth, breadth, and talent of multi-cultural artists,”
— Patricia Andrews-Keenan

After hosting 19 events in 2018, the most memorable being their exhibition of 15 Chicago and national artists during the prestigious Art Miami/Art Basel exhibition in December, they are now in the midst of executing a series of art exhibitions and events. That will be followed by a series of events, salons, and exhibitions leading up to Black Fine Arts Month which the group is launching in October.

Clark is an analyst by day, and an artist by night, with degrees in mathematics and mechanical engineering from Spelman College and Georgia Tech. She creates mixed media paintings using hair, fabric, and/or jewelry. Her artistic goal is to inspire others by creating paintings that are uplifting and motivational.

London began her artistic career in 2012 and is highly sought after for her live paintings. The art educator is working to solidify her place in the Chicago art scene by exhibiting across the country and hosting solo shows of her work.

White’s artistic belief is that each life has a story, often containing insights that lead us to where we are today. White’s art is an extension of his sight, and he is committed to being the connector between reality and the beautiful practice of painting.

Artist and sculpture Rodney ‘Oko” Wade calls himself a musician with a paintbrush. He began expressing his creativity doing graffiti and subway art. Later heading to New York his artwork, he attained recognition featured in publications like The Robb Report, Private Air and Luxury Living. His goal is to inspire others and show them that art can open doors to a better life.

“We continue to be delighted by the depth, breadth, and talent of multi-cultural artists,” Patricia Andrews-Keenan, founder and CEO of Pigment. “Adding these amazing talents to the collective will expand their reach by showcasing them to new audiences.”

The Pigment Reveal in Miami by Pigment’s 15 Chicago-based artists, plus national guest artists, was widely hailed as a stunning visual display of multi-cultural art, and the exhibition was covered by national publications including Black Art in America. During the event, Pigment International recognized national artist Frank Frazier. During the event, the organization launched the inaugural issue of Pigment Magazine and the second issue is set for this summer.

About PIGMENT Intl.
PIGMENT-Intl ® is a multi-media arts collective redefining global arts, culture, and innovation. The organization is committed to creating new platforms for the advancement of the modern multi-cultural aesthetic in the visual arts. Pigment serves as a connector for emerging creators, collectors, curators, investors, grant makers, and other stakeholders. It is a destination for art enthusiasts to experience customized and curated salons, events and exhibitions that spark dialogue and inspire those constituents. Follow Pigment, Int’l on FB and IG