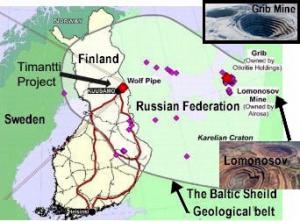 The Spring breakup is expected to result in Arctic Star Exploration Corp. TSX-V:ADD excavating kimberlite targets in the last week of May at its diamond project

Arctic Star is now in the center of what could continue into a Tier 1 diamond discovery at Timantti.”
— Market Equities Research Group

Arctic Star's 2019 kimberlite exploration program is currently underway at Timanti. The Spring breakup is expected to result in Arctic Star excavating kimberlite targets in the last week of May. Unique to the Timantti Diamond Project is the ability of Arctic Star to discover kimberlites with the use of backhoe, as targets are near surface under nominal overburden. Timantti is located 17 km from the town of Kuusamo Finland, and only ~450 km SE of the multi-billion dollar producing Lomonsov and Grib diamond mines in Russia. 'Timantti' is the Finnish word for diamond, and Arctic Star is now in the center of what could continue into a Tier 1 discovery — having already discovered significant diamantiferous kimberlite. The large land package consists of a 243 hectare Exploration Permit and a 193,700 hectares Exploration Reservation. The caliber of the exploration professionals that are associating themselves and reputations to the project is impressive, they include the former lead geologists that discovered Diavik diamond mine in Canada, and the nearby Grib diamond mine in Russia.

Six noteworthy insights from above interviews on the 100%-owned flagship Timantti Diamond Project in Finland:

1) Arctic Star's Timantti Property is part of the Karelian Craton, same as the Grib Diamond Mine in Russia.

2) One of Arctic Star's Directors and head of the program is Roy Spencer, he is responsible for having discovered the Grib Diamond Mine and is looking to replicate that success now at Timanti.

3) There are excellent mineral trains leading into Arctic Star's ground. The chemistry of the Timanti property is similar to Grib.

4) Arctic Star is able to explore for diamonds at Timantti for less than what most others spend elsewhere due to the projects location proximal to exceptional infrastructure (roads, airport, town, power). It is possible to take a taxi from the airport to Arctic Star's first kimberlite discovery in ~20 minutes. Additionally noteworthy, is that kimberlite bodies have been discovered simply by excavating anomalies with a backhoe.

5) Current program has ADD excavating kimberlite targets. Any targets will be followed up with drilling to delineate and have core that can undergo caustic fusion.

Quote: "Last year's fusion program, which was only 409 Kg, which is kind of akin to a little coffee table in size, produced 1300 diamonds, and some of those were commercial size – which was exciting, because it was a very small sample. The diamond curves for White Wolf in particular are very good and its not about discovery anymore — it's about building tonnage. So, we're really at a really critical point, this program could produce new kimberlites that can give us tonnage – we have a minimum tonnage we can move forward at, so we're getting close to that."

6) The Spring breakup is expected to result in Arctic Star excavating kimberlite targets in the last week of May. Unique to the Timantti Diamond Project is the ability of Arctic Star to discover kimberlites with the use of backhoe, as targets are near surface under nominal overburden.

The following has been identified for additional DD on Arctic Star Exploration Corp.:

This release may contain forward-looking statements regarding future events that involve risk and uncertainties. Readers are cautioned that these forward-looking statements are only predictions and may differ materially from actual events or results. Articles, excerpts, commentary and reviews herein are for information purposes and are not solicitations to buy or sell any of the securities mentioned.