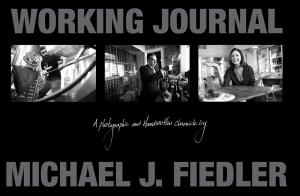 A photographic and hand-written documentary of the jobs, professions, and endeavors that shape our connectivity to the people and world around us.

A photographic and hand-written documentary of the jobs, professions, and endeavors that shape our connectivity to the people and world around us.”
— Michael J. Fiedler

AVON, CONNECTICUT, USA, June 7, 2019 /EINPresswire.com/ — FOR IMMEDIATE RELEASE: Award-winning Photojournalist Michael J. Fiedler announces pre-orders for Working Journal ~ A photographic and handwritten documentary of the jobs, professions, and endeavors that shape our connectivity to the people and world around us. FALL release: http://www.working-journal.com/

"It has been a pleasure helping Michael bring this project to life. With handwriting being a dying art, this project will not only be a meaningful one for all involved, but it will also leave a historical mark in the world for hundreds of years to come when future generations are searching our libraries for writings from days gone by," said Diana DeLucia, Producer.

While the idea for this book came from many sources of inspiration and individuals, it all began on a 1500-foot pier at the Newport News Naval Shipyard in Virginia. It was there in 1987 while serving as a Naval Photojournalist aboard the aircraft carrier Dwight D. Eisenhower that Fiedler learned how to make pictures.

The ship was in dry dock and every day, Fiedler's mentor, Warrant Offer Patrick Wilkerson would task him with photographing the cacophony of work being done to the ship. The activity was staggering – a labyrinth of wires, cranes, crates pulleys and machines – surrounded by a blur of electricians, welders, engineers and seamen hauling cargo onto the thousand-foot behemoth. He may not have realized it at the time, but Officer Wilkerson's daily assignments were forming the basis of how Fiedler wanted to capture people in images. He wanted to photograph them doing their jobs.

Another component of this project came not from Fiedler's photography, but from his fascination with handwriting. When he joined the Navy in 1986, his Mom, who was an avid diarist, presented him with a simple journal and a black metal pen. He began writing in his journal in February of 1987 and has not missed a day in over thirty years, compiling over 80 volumes containing nearly 20 million words. During this time Fiedler became fascinated with fountain pens and the way they embellished his writing more fluidly and expressively. He collected almost 100 pens of noted manufacturers such as Mont Blanc, Pelikan, Omas, Conway Stewart and Sailor Pens from Japan.

In 1974 the noted oral historian and radio broadcaster Studs Terkel wrote Working- People Talk About What They Do All Day and How They Feel About What They Do. Later in Fiedler's career as a photojournalist at daily newspapers in Connecticut and the New York Times, he would meet and photograph people who had seemingly stepped out of Stud's influential book – truck drivers, lawmakers, chefs, high school teachers, nurses, etc.

He carried a small journal in his camera bag and would ask his subjects to write a page or two about what they did, why they did it, and how they felt about their work. He was always fascinated by what they did for a living. It was important to him to allow the subject to deliver their thoughts via their own handwriting, rather than the typical technique of answering verbal questions.

It wasn't until Fiedler met with one of his subjects, Walter Woodward, the Connecticut State Historian, that he began pairing his subject's portraits with their handwriting. After Woodward examined the small journal and read a few of the entries, he smiled looked up and said, "This is a great idea, but there's one problem." "What's that Walter?" Fiedler asked. "These are great stories, but you're a photographer. Where are the pictures of the people who wrote these pages?"

"That was the ah-ha moment. The lightbulb went on," remarked Fielder.

The book you have now is the culmination and refinement of all the ideas, work and insightful inspiration of people like Studs Terkel, Sebastiao Salgado, Hiroji Kubota, Warrant Officer Wilkerson, and Walter Woodward.

"Making photographs for this project is richly rewarding for me. I love the process of it. I explore peoples working lives by observing them for a day. Photographing people at work amplifies my knowledge of the world and the people in it. It's fascinating to me to observe what it's like to design a wedding dress, operate a crane, conduct an orchestra or put a perfect shine on a pair of shoes." said Fielder.

With the help of Producer Diana DeLucia and Bryan Destin, Photographer and Graphic artist, this coffee table book has become a project that will lead Fiedler to his lifelong dream of encapsulating the portraits, writings and history of working people in the world for many years to come.