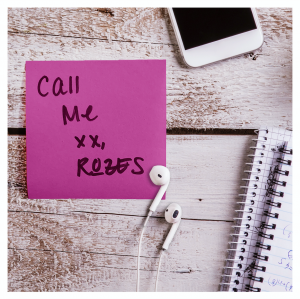 Just know that you can call me, and I’ll always be there.”
— ROZES

It arrives today via Photo Finish Records. Get it HERE.

Marking an evolution from the electronic-tinged stylings of earlier material, she embraces her roots on the track, performing alone at a solo piano and belting out a hard-hitting and heartfelt hook. The song signals a historic first as well.

The collaboration doesn’t simply urge #GIRLPOWER, it screams it!

Since the artist remains a staunch champion for the gender equality and female empowerment movement evidenced by delivering the “Official Anthem of the 2019 Women’s March” with recent single “Halfway There”, she desired to deliver an all-female song as her latest message and made good on this promise with “Call Me.”

It also speaks to another important cause for her. An advocate for mental health, she posits that support for those suffering should last beyond one month and intentionally dropped the tune after “Mental Health Awareness Month.”

“Call Me” illuminates ROZES’ marked growth as a songwriter and performer. In between resounding piano chords, her soulful delivery upholds an assuring message, “Just know that you can call me, and I’ll always be there.” Penned the day of Kate Spade’s suicide, it addresses a cause close to the singer’s heart and supports those struggling.

Speaking on her inspiration for the song, she said, “I think it's important that we do not underestimate the power of a phone call. The courage to reach out can change a life, and maybe it’s your own. I would say this is my most ‘ballad’ type song I’ve ever released. It’s honest about mental health and offering hopeful hand to those in thick of it. It's also important that we remember that our mental health is not a burden. There are so many ways to seek help and it is important that we not only recognize the signs of depression in others, but to also recognize it in ourselves. Like I always say, it's okay to not be okay, but not okay to stay that way.”

It also precedes her next EP and evolution coming soon.

ROZES’ voice resounds louder than ever in 2019.

More On ROZES:
“Call Me” follows ROZES’ 2018 debut EP i don’t know where i’m going, but i’m on my way. The EP has over 11 million cumulative streams on Spotify alone and features her hit song “Where Would We Be” co-written alongside Toby Gad [Fergie, John Legend, Beyoncé] and produced by Nicky Romero. It clocked 10 million cumulative streams within a few months as she performed on Good Morning America, CONAN, and more.

Within just five years, an unfiltered, unbridled, and undeniable musical release of emotion quietly established her as one of pop’s most ubiquitous voices—streamed over 1 billion-plus times and praised by everyone from Entertainment Weekly and Marie Claire to Paper Mag and Pitchfork.

She set the stage for such progression by building an impressive discography since her debut in 2014. This growing catalog spans the artist’s Billboard Hot 100-breaking, triple-platinum collaboration with The Chainsmokers, “Roses,” as well as “Matches” with Cash Cash, “Girls On Boys” with Galantis, and more as well as her solo debut EP Burn Wild.

More On SHE IS THE MUSIC:
She Is The Music (SITM) is a nonprofit championing equality, inclusivity and opportunity for women. An independent organization, SITM is working to increase the number of women in music and transforming the gender landscape of the industry.

SITM unites women across the industry, creating strength and impact on a global scale. The nonprofit provides umbrella resources and support for female-focused initiatives – both through its own programs, as well as external efforts around the world. SITM’s core programs include all-female songwriting camps; the largest database of women creators in music; and a forthcoming mentorship program.