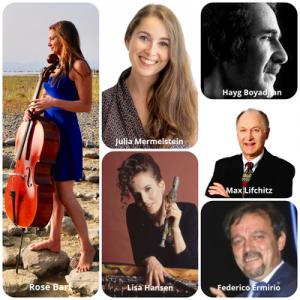 The North/South Chamber Orchestra under the direction of Max Lifchitz performs music by composers hailing from Argentina, Canada, Italy, the US and Venezuela.

The concert will start at 8 PM and end approximately at 9:30 PM. It will be held at the acoustically superior air-conditioned auditorium of Christ and St. Stephen's Church (120 West 69th Street — between Broadway and Columbus) in Manhattan. No tickets or reservations needed.

ABOUT THE COMPOSERS AND THEIR MUSIC

Hayg Boyadjian's Fourth Canticle for flute and strings evokes a pastoral scene where a shepherd attends his sheep in a landscape of undulating hills. While the opening melancholic melody in the flute represents the loss of his sweetheart, dance-like rhythms portray the shepherd remembering happier days. The piece concludes quietly as the shepherd accepts his loss and his fate. Boyadjian was born in Paris to Armenian parents but grew up in Buenos Aires, Argentina where he attended at the Franz Liszt Conservatory. North/South's performance of Fourth Canticle will honor the composer on the occasion of his 80th birthday.

Teresa Carreño's Adagio con larghezza is an intensely lyrical work adapted from the composer's String Quartet. Born in Caracas, Venezuela in 1853, Carreño came to New York at a young age to study with Louis Moreau Gottschalk. Described by the press as the Valkyrie of the pianoforte, Carreño toured throughout Europe and was invited to perform at the White House by Presidents Lincoln and Wilson. Also a successful singer she was active as conductor of opera and authored the national anthem of her native country. She died on June 12, 1917 at her West End Avenue apartment in Manhattan.

Federico Ermirio's Concerto Breve for cello and strings is a dramatic composition in three sections where the soloist and ensemble function as musical rivals. While at first a mere accompanist of the solo cello the ensemble gradually transforms itself into a second soloist as the piece unfolds. Born in 1950 in Genova Ermirio studied with Goffredo Petrassi at the Accademia di Santa Cecilia in Rome and taught at the Puccini Conservatory in La Spezia. His works have earned prizes at several international compositions and have been performed throughout Europe. A few seasons back the North/South Chamber Orchestra premiered and recorded his Landscapes of a Soul.

Max Lifchitz's Brightness Aloft is based on the lilting melody Xicochi Conetzintle — a 17th century Christmas Villancico written for the Mexico City Cathedral. A lullaby, its title Nahuatl name means "Sleep, O my Child" obviously referring to baby Jesus. The composition consists of a series of unassuming variations on the motet's iridescent melody which is introduced at the opening by the solo violin. The work was written during the early days of February 2015 while reacting to the gradual increase in daylight that effortlessly follows the Winter Solstice. Lifchitz began his musical training in his native Mexico City before being a scholarship to attend The Juilliard School. More than 60 compact disc albums feature his performances and compositions.

Julia Mermelstein's Shift explores moments of musical transparency through the awareness of space and movement. Musicians are asked to externalize their breathing through their bowing thus allowing their sound to become an extension of their inner pulse. All of these elements together reveal a broader form of how movements interconnect and subtly change over time. Based in Toronto, Mermelstein music is influenced by Buddhist philosophy, psychology, and ritualistic tendencies that shape its relationship to form, stillness, and sense of space. Her music Her works has been performed throughout Canada and Japan and is being heard in New York City for the time as part of this concert.

Flutist Lisa Hansen's critically acclaimed EMI/Angel recording of Joaquín Rodrigo's Concierto Pastoral with the London Royal Philharmonic Orchestra has been broadcast worldwide. The New York Times described her playing as "irresistibly lyrical" while Fanfare proclaimed: "One might well prefer Hansen to Galway." A graduate of The Juilliard School, Ms. Hansen is now the flute professor at Kean University. She has performed and recorded with North/South Consonance since 1988.

Since its inception in 1980, the North/South Consonance, Inc. has brought to the attention of the New York City public over 1,000 works by composers hailing from the Americas and elsewhere representing a wide spectrum of aesthetic views. Its 39th consecutive season was made possible in part, with public funds from the New York State Council on the Arts and the New York City Department of Cultural Affairs. Additional support provided by the Women's Philharmonic Advocacy, the Music Performance Trust Fund as well as the generosity of numerous individual donors.