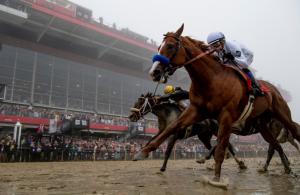 We applaud Senators Gillibrand and McSally and are pleased to join together to end a shameful period where unscrupulous trainers have put horses and jockeys at risk of death.”
— Marty Irby, executive director at Animal Wellness Action

“Horses should run on hay, oats, and water, not on a cocktail of performance enhancers and medications,” said Marty Irby, executive director of Animal Wellness Action. “We applaud Senators Gillibrand and McSally and are pleased to join together to end a shameful period where unscrupulous trainers have put horses and jockeys at risk of death.”

“The Jockey Club is grateful to Senators Gillibrand and McSally for their support and for introducing the Horseracing Integrity Act to the Senate,” said Jim Gagliano, president and chief operating officer, The Jockey Club. “The Horseracing Integrity Act is the only solution to improving the welfare of horses across all racing jurisdictions and achieving comprehensive reform in the sport of Thoroughbred racing.”

The Horseracing Integrity Act is backed by the Coalition for Horse Racing Integrity, which includes Animal Wellness Action, The Jockey Club, The Breeders’ Cup, The Preakness Stakes (Stronach Group), The Belmont Stakes (New York Racing Association), Keeneland, and the Water Hay Oats Alliance. Uniform oversight and regulation of the industry are needed to stop unethical trainers and veterinarians from doping horses to improve their chances of winning. The Horseracing Integrity Act can achieve this goal. It’s House companion bill, H.R. 1754, introduced earlier this year by U.S. Reps. Paul Tonko (D-NY) and Andy Barr (R-KY) has garnered 113 cosponsors in the U.S. House.

The horse racing industry has no unified regulatory system, unlike the NFL and other major sports, and it is governed by a contradictory patchwork of state laws and regulations. Imagine if all 32 professional football teams had different sets of rules in each stadium. That is exactly the situation in each of the 38 state racing jurisdictions throughout the United States. State racing commissions allow various medications and levels of permissible medications that vary widely.