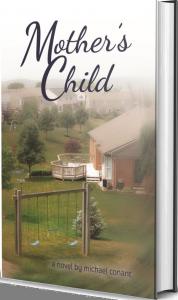 A fictional retelling, of the factual events, of what it means for a family accused of child abuse.

SARASOTA, FLORIDA, UNITED_STATES, June 19, 2019 /EINPresswire.com/ — Mother’s Child, by author and publisher Michael Conant, explores the challenges of a family with a child with an undiagnosed disease.

After serving as the president of CureMito, a non-profit organization dedicated to promoting research and awareness of mitochondrial disease, Mr. Conant planned to write a scene for one of the board member’s daughters who attended an arts high school in Pomona, CA. Further discussion turned that project idea into a one-act play. After life got in the way, and the daughter graduated from high school, the project morphed into a book. Flash forward to after four years of procrastination, a year of thinking about it, and 18 months of writing, editing, and re-writing, and Mother’s Child finally came to fruition, launching in March of this year.

“I had the book in my head for four years. It bothered me that this promise had gone unfulfilled for so long and, after launching my publishing company and working with many talented editors and authors, I found I had run out of excuses for putting it off. Finally, I found the discipline to make it happen.” Said Mr. Conant.

The novel evolves around the fictional Gallagher family and is told through the voice of June Gallagher, the mother of Ernie, a child sick with many unidentified ailments. The story opens as June becomes a reluctant hero, saving a child from a burning car that is involved in a horrific accident. That opening scene proves poignant as much of the remainder of the book focuses on June, along with the rest of her family, husband Tim and daughter Elsie, as she tries desperately to save her son Ernie from an unknown disease.

As the novel continues, we share the family’s struggles with the disease, as well as with overly ambitious family services, interfering hospital staff, and a doctor who’s ignorance of mitochondrial disease leads to unfounded accusations of child abuse. As Mr. Conant notes, “The characters may be fictional, but the story accurately represents what too many families go through when their child is diagnosed with mitochondrial disease.”
Mr. Conant adds, “I wanted the novel to be a story about a family; about a woman finding her inner strength and voice, about developing friendship from unexpected places, and about the humor of life that goes on within the struggles of having a sick child. I wanted to write a story that anyone could identify with and that would stick to their hearts – not just a book about mitochondrial disease, but about life.”

Mother’s Child is available on Amazon, B&N, Indie Bound, and most book retailers.

Michael Conant is the publisher and founder of Incorgnito Publishing Press. Before entering the world of book publishing, Michael spent over twenty years in b2b publishing. He served as a circulation, sales, and marketing executive, managing products across several industries, with a concentration in financial publications.

Prior to his foray into publishing, Michael pursued his love of theater as an actor, singer, director, and producer at regional theaters, dinner theaters, and at several Off-Off Broadway theaters. Michael introduced New York audiences to the American premier of Hal Shaper’s musical adaptation of Jane Eyre, which featured Michael as Rochester along with a very young Alyssa Milano as his ward, Adelle.

Shortly after moving to Pasadena, CA, Mr. Conant was introduced to Cure Mito, an organization of “Mito Moms” dedicated to funding Mitochondrial Disease research in support of Dr. Richard Boles at Los Angeles Children's Hospital. Michael helped the group secure non-profit status and was elected as the organization’s first president.
Mr. Conant is also the co-author of David Margrave: The plumber who outwitted the IRS.