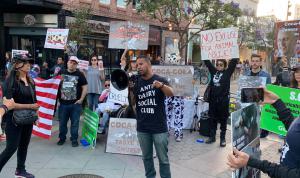 Protesters say they will continue this global campaign until Coca-Cola ditches dairy. 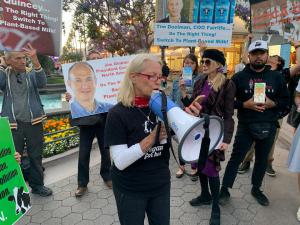 This woman wept as she described hearing the mother cows bellowing for their babies, who’d been ripped away from them. 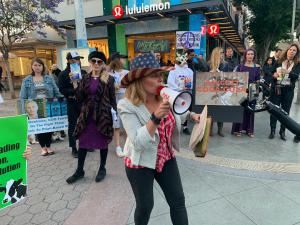 This mother of two said dairy is a violation of everything maternal because mothers and babies are separated!

In crisis there's opportunity. Coca-Cola can now get out of a dying industry. The next generation is switching to plant-based milk in droves. It's where the smart money is headed! It's cruelty-free.”
— Protester at Santa Monica Demonstration

Protesters displayed the readily-available alternatives to cruelty-filled cow’s milk. Holding cartons of almond, soy, cashew, oat, rice and hemp milk, demonstrators in cow masks respectfully begged CEO Quincey, Coca-Cola North America President Jim Dinkins and Fairlife COO Tim Doelman to discard their willful ignorance and admit the obvious: their stated values of integrity and high animal welfare standards are inherently incompatible with dairy. Simply put, there is no nice way to rip a baby away from his or her mother, much less do that to tens of thousands of calves.

Actor Kenziah Rubens mentioned that “Ocean Eyes” singer Billie Eilish was so revolted by the Fair Oaks videos, she urged her 26 million Instagram followers to go vegan, noting the animals are being “fully tortured.”

As Fairlife and Coca-Cola are hit with another wave of lawsuits over these gut wrenching videos, grassroots protests are spreading across America and even to the United Kingdom! See the events pages below for protests in London, Houston, Connecticut, Portland and New York City! Still more demonstrations are in the planning stages. A wide array of animal welfare and environmental groups, under the banner Coalition Against Cruelty, are demanding Coca-Cola CEO James Quincey immediately take steps to cut his beverage company’s ties with the cruel and environmentally unsustainable dairy industry.

The Coalition Against Cruelty urges Coca-Cola to switch to healthier, more environmentally friendly and cruelty-free plant-based milks. Coca-Cola’s own website states, “Fairlife is a partnership between The Coca-Cola Company and Select Milk Producers Inc. Coca-Cola distributes Fairlife products.” Fairlife has become embroiled in scandal in the wake of Animal Recovery Mission’s explosive undercover investigation of Fairlife Milk’s longtime supplier Fair Oaks Farms. The video shows calves being hit, dragged, shot, sat on, left on dead piles and, in other ways, subjected to nightmarish abuse. All this while Coca-Cola insists, in its written material, its partnership with Fairlife is based on “…exceptional cow care, smart and responsible farming, and sustainable agriculture.”

Demonstrators implore CEO Quincey to consider the reality: the dairy industry is inherently cruel. For humans to drink cow’s milk, cows must be impregnated and – after giving birth – separated from their babies, who would otherwise drink the mother’s milk nature intended for them. This is why the Animal Recovery Mission’s video shows rows upon rows of calves in hutches, alone, away from their mothers. Protesters point out the obvious. The calves become despondent and don’t want to drink the replacement fluid from the rubber nipples. Workers are tasked with getting them to drink it. Frustration ensues, creating an environment ripe for abuse. This is why undercover investigations at dairy farms routinely undercover abuse. No “review” will change the fundamental cruelty of the dairy industry. No arrest of low level workers will get to the heart of the malignancy at the core of this process.

No desperate attempts to blame the messenger will mask the industry’s harsh realities. Indeed, that will only confirm the moral bankruptcy of the industry’s doublespeak, where shock is expressed over dead piles brazenly left out in the open, where people who systematically exploit animals feign heartbreak and blame underlings when exposed. The playbook has become worn and the world is getting wise to it.

Coca-Cola executives have publicly revealed their strategy to premium-ize milk and, thereby, be able to charge a premium. The Coalition Against Cruelty suggests the wiser strategy would be to pivot to the products being increasingly embraced by millennials and Gen Z’ers: plant-based milks. Coca-Cola’s stated corporate vision includes the following: “Be a responsible citizen that makes a difference by helping build and support sustainable communities.” Animal agriculture, which includes dairy, is a leading cause of climate change, responsible for more greenhouses gases than all transportation combined.

In crisis there is opportunity. A pivot to genuine compassion and genuine sustainability would be applauded globally by animal lovers, environmentalists and consumers in general, all of whom were revolted by the video evidence of barbarism and hypocrisy. Climate change is getting worse and will soon create an economic catastrophe that will devastate all businesses including Coca-Cola. We know this switch can be done because one google search shows it is being done. Coalition Against Cruelty’s protests against Coca-Cola will not end until a real change occurs. The time is now.

Any and all of the companies mentioned above are invited on JaneUnChained.com any time. We have reached out to Coca-Cola repeatedly without success.

Listen to the speeches by more than a dozen Americans who have had it with factory farm animal cruelty!