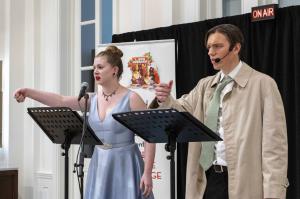 The whole feel of the event was that you were transported back to that time, before technology, when people entertained people and you had to use your imagination.”
— Bob Dobin, guest at Scientology Information Center's Fiction Reading

"Murder Afloat" is the story of a daring Narcotics operative on the ill-fated SS Cubana, hot on the trail of a million and a half dollars worth of heroin while trying to solve a string of murders in its wake.

L. Ron Hubbard was among the most prolific and popular writers through the Golden Age of Pulp Fiction. Indeed, between 1934 and 1940, some 140 L. Ron Hubbard tales appeared in the pages of legendary pulp magazines—often as many as three titles an issue and bylined under some fifteen pen names. With 19 New York Times bestsellers and more than 350 million copies of his works in circulation, Mr. Hubbard is among the most acclaimed and widely read authors of our time.

One guest, Bob Dobin said of the performance, “The whole feel of the event was that you were transported back to that time, before technology, when people entertained people and you had to use your imagination.”

Another attendee, said, “What a unique performance! I loved the action and suspense. It was quite entertaining.”

“We take the characters and the flair of the era to heart when we re-enact these stories,” said Kathy Sweigart, the theater’s Director. “Add in talented actors with varied accents and voices plus a touch of costumes for visual effect and you have a great show. L. Ron Hubbard’s stories are so creative and imaginative they provide us a wonderful opportunity to get our artistic juices flowing and deliver a truly professional and highly entertaining performance.”

The theater troupe’s next old-time radio-show reading performance will be the humorous sci-fi story, The Professor Was a Thief, on Saturday, August 24th at the Scientology Information Center.

The L. Ron Hubbard East Coast Theater is a volunteer group founded in 2011 and delivers classic radio theatre performances of fiction short stories written by L. Ron Hubbard in the 1930s and ‘40s.

The Scientology Information Center, located in the Historic Clearwater Building in downtown Clearwater, opened on July 11, 2015, and currently houses a gallery of audiovisual displays with some 400 videos. The Center is open to all and provides a self-guided tour showing basic Scientology beliefs, Churches around the world, ongoing social programs, and the life of L. Ron Hubbard, Scientology's founder. The Center offers tours to the broad public and civic leaders; holds concerts, theatrical performances, and receptions for the community; and opens up the use of its conference room to social, civic and non-profit groups. For more information on Scientology, visit www.scientology.org or the Scientology Network on DirecTV channel 320, or streaming at www.scientology.tv or apps at AppleTV, fireTV, and ROKU.

To reserve seats for the upcoming event or to learn more about the center, contact Amber Skjelset, Manager of the Scientology Information Center at 727-467-6966 or amber@cos.flag.org.