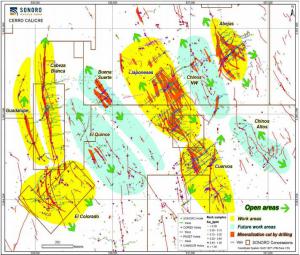 NEW YORK, NY, UNITED STATES, June 28, 2019 /EINPresswire.com/ — Sonoro Metals Corp. (TSX-V: SMO) (US Listing: SMOFF) (Frankfurt: 23SP) is aiming to release a first-pass/maiden resource this Summer-2019 on its flagship Cerro Caliche Gold Project in Sonora State Mexico, located 3 hrs north of Hermosillo, 3 hrs south of Tucson, AZ USA, along the prolific Sonora-Mojave Megashear, between Agnico Eagle and GoldGroup's open pit mines. The coming maiden resource (only weeks away) is expected to have both Inferred and Indicated categories, and be meaningful enough to attract market attention. The Company is already planning an aggressive ~7,000 m 'Phase 3' drill program with the goal of establishing a resource exceeding 1,000,000 oz of gold before mid-2020. The management team is considering a number of different scenarios and interesting offers, including a non-recourse gold-backed debt financing arrangement for an open-pit heap leach pilot plant operation to generate income, cash flow the bigger picture, and minimize dilution. Investors can look forward to multiple news catalysts playing out over the next few months as the Cerro Caliche Gold Project advances.

Sonoro is the subject of a Mining MarketWatch Journal review, full copy of the review may be viewed at https://miningmarketwatch.net/smo.htm online.

Sonoro Metals Corp.'s management team is highly-accomplished, and its geological team is dialed-in on the gold at Cerro Caliche. Melvin Hendrick, P.Geo is Sonoro's V.P. of Exploration, he has nearly half a century of experience under his belt, including Chief Geologist for Phelps Dodge, and VP Exploration for Pediment Gold Corp., bought by Argonaut in 2011, he and his team have an impressive track record in mineral discovery.

Anyone that has been around the resource sector for a while will know the reputation of John Darch (Sonoro's Chairman & Director), and Kenneth MacLeod (President, CEO, & Director);

John Darch headed Asia Pacific which identified, explored and developed one of the world’s largest potash deposits located in Thailand (and lowest cost too), he also headed Crew Development Corp. in the 80s, 90s, and early 2000s until it was taken over (from pennies to $4+/share). The Sonoro strategy is the same as Crew; (a) secure revenue, (b) secure development properties, and (c) new exploration. John Darch was also heavily involved with Botswana Diamondfields whose stock exceeded $6/share, and Nevada Goldfields ($8+/share).

Ken MacLeod is well know as a financier over the last 35 years in the oil, gas, mining, and energy sectors. The last big project he worked on was Western GeoPower Corp. in California, that company was bought-out, he then set up a company to advance renewable energy projects in the Philippines that included a 600 MW dam, and that company was sold to a subsidiary of San Miguel Corporation in 2014. Ken MacLeod now has his focus on adding shareholder value in Sonoro Metals Corp.

Sonoro’s Operations Manager, Jorge Diaz, has a long history as both a mining and metallurgical engineer. Jorge is well known for leading the development, construction and operation of numerous major mines throughout northern Mexico. Similar to his leadership in the successful development of giant mines like Alamos Gold’s Mulatos mine and Argonaut Gold’s La Colorada mine, Jorge is leading the development of Sonoro's Cerro Caliche pilot operation. Jorge’s experience in building mines adds to Sonoro’s confidence that Cerro Caliche has the potential to relatively quickly become a significant cash-flowing asset for Sonoro.

Near-term heap-leachable oxide deposit open pit gold mining scenario developing at SMO.V's Cerro Caliche Gold Project:
SMO.V's Cerro Caliche Gold Project is advanced-stage drilling-wise, in total (current and historical to date) that is more than 20,000 m drilling. Sonoro Metals has two drill programs (~10,000 m; ~100 holes and ~6,000 samples) under its belt now, plus there were 3 past operators on the property (the last two operators ran out of money) and SMO.V is fortunate to have inherited 43-101 compliant data on 116 holes and ~3,600 samples (~$3 million worth in exploration) from them.

Southeast-Northwest trending vein structures litter the area, with disseminated gold between the gold structures. To date SMO.V has identified 17 mineralized clusters/zones on the Cerro Caliche property. The majority of drilling to date is concentrated on the central zones of Japoneses, Cuervos, and Abejas, and western central zones of Cabeza Blanca, Guadalupe, and El Colorado. The yellow shaded areas in the image above are the more advanced work areas, the Japoneses zone is most advanced with close spacing drill holes and is where the indicated resource is expected in the upcoming first-pass/maiden resource. See the full Mining Journal article for details on the average expected grade.

Much of the mineralization begins at or near the surface. This reality makes it all the more reasonable to anticipate the development of a large tonnage, open pit, oxide deposit, amenable to a heap leaching operation, much like several neighboring mines with similar grades that are in operation in the region.

Content above may contain forward-looking statements regarding future events that involve risk and uncertainties. Readers are cautioned that these forward-looking statements are only predictions and may differ materially from actual events or results. Articles, excerpts, commentary and reviews herein are for information purposes and are not solicitations to buy or sell any of the securities mentioned.

Video: Interview of Sonoro Metals Corp.’s President and recommendation by Greg McCoach of The Mining Speculator.