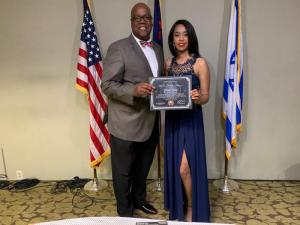 I am overwhelmed to receive this prestigious award from this amazing organization and to work along side such great men and women that are making an impact around the world.”
— Ms. Riddell Mackey

PALM SPRINGS, CALIFORNIA, USA, July 2, 2019 /EINPresswire.com/ —  I Change Nations honored Riddell Mackey with a World Civility Award recently at an event in Palm Springs California. Riddell Mackey was honored for her humanitarian work and dedication to educating young people about sex trafficking and efforts to decrease suicide and encourage young people to continue their education. Ms. Mackey also runs a recovery for girls who are rescued from sex trafficking.

I Change Nations is a Culture of Honor System, the organization is committed to bringing back the lost art of honor by building a Culture of Honor that recognizes individuals throughout the world who have exemplified extraordinary humanitarian efforts to effectively change nations. We honor people and organizations that believe every life is valuable and is created to bring a contribution to the world. ICN is the largest “building cultures of honor” network in the world.

I Change Nations was founder by Dr. Clyde Rivers, Dr. Rivers is the acting Representative to the United Nations – New York for the Interfaith Peace-Building Initiative (IPI) and the United Nations Department of Public Information (DPI Dr. Rivers is the acting Ambassador and the Director of the North American Division of the Golden Rule International.

Dr. Clyde Rivers is the Spokesperson for the World Civility Day, Community Civility Counts Initiative, Dr. Rivers has been honored internationally and has received numerous awards. In 2017 Dr. Rivers won the United States Presidential Life Achievement Award for over 4,000 hours of serving the nation and humanity Dr. Rivers is the recipient of the Danny K. Davis Peace Prize 2017, U.S. Congressman of Illinois. This annual Congressional Award given for excelling in his field and making a difference in people’s lives.In 2017 Dr. Rivers was given the Title of Don/Sir Dr. Clyde Rivers as he was Knighted into the original Kingdom of Guatemala, and the great city of La Antigua the first city established by the Spanish Monarchy. Knighted by Lord EDUARDO L. PRADO S. the Commodore De Santiago De Los Caballeros De La Antigua Guatemala Dr. Rivers is the recipient of an Honorable Mention for the American Civic Collaboration Award 2017 – Celebrating Partnerships that Strengthen America Dr. Clyde Rivers is the Honorary Ambassador at Large for the Republic of Burundi, as appointed by H.E. President Pierre Nkurunziza and Special Advisor to President Pierre Nkurunziza, President of Republic of Burundi Africa.

Dr Rivers states “ It is an honor to present this award to Riddell Mackey for the awesome work she is doing to touch change young people’s lives.”

Ms. Mackey states “I am overwhelmed to receive this prestigious award from this amazing organization and to work along side such great men and women that are making an impact around the world.”

Others that have received awards from I Change Nations include such leaders but not limited to President Yoweri Museveni, of Uganda – Honored for his great leadership in establishing and maintaining peace in his country.

First Lady, Janet Museveni, of Uganda – Honored for the AIDS awareness policy ABC (Abstinence, Birth Control, and Contraception) an ever-present battle for the health of their people.

Vice President of Kenya, Kalonzo Musyoka Honored for his efforts in the peace making process for Kenya, Sudan and Burundi.

Former President Olusegun Obasanjo, of Nigeria – Honored for the Anticorruption policies he implemented in Nigeria.

First Lady Maria de Luz Guebuza, of Republic of Mozambique – Honored for her humanitarian efforts for the youth and women of her country as well as bringing AIDS awareness programs.

Dr. Vanda Pignato – Former 1st Lady of El Salvador, was honored for her tireless efforts in protecting for women’s rights in the Republic of El Salvador.

Dr. Kenneth David Kaunda – Former President of Zambia, was honored for his life’s work to establish peace in Zambia and on the continent of Africa.

I Change Nations is also know for honoring everyday people that are doing extra ordinary things to touch and change the lives of people. Receiving an award that night was 7 year old Isabella Sequeria for her efforts to educate and stop bullying along with her dad Carlos Sequeria for his work and effort to inspire and motivate people to be all they can be. Also receiving an award where the founders of Camp X Tradecraft for their work in the area of security and self defense.

Riddell Mackey serves as the Chief Operations Officer (COO) for Dr. Antoine Chevalier’s company Time 2 Heal. Ms. Mackey holds significant roles with many government and global experts, some of which include:

As a philanthropic humanitarian, she sits on the board of nine nonprofit organizations. She recently has been appointed as lead director of the board for the Dr. X World Peace Foundation. Riddell was appointed the Millennial Chair Holder for The World Changers Society 2014, and this year was appointed as Dame Commander of Kalakaua Hawaii.

Ms. Mackey owns two businesses of her own. While holding a residential recovery room in the Children’s Cancer Recovery Facility, Riddell not only took on the fight against ovarian and thyroid cancer while only being 18 years of age, but also decided to open her first company while coming off of chemo and starting radiation treatment. In 2012 she initiated her strategic business alliance agency, Riddell & Associates, Inc. Additionally, she opened a sister company, Riddell Enterprises, and became the resource center to several industries.