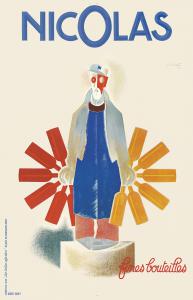 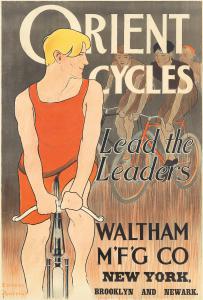 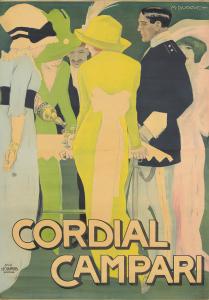 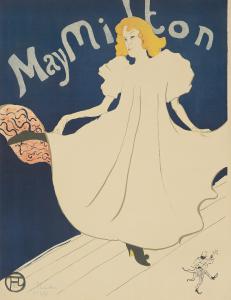 Charles Loupot sparked a frenzy of bidding for his never-before-seen designs. “Nicolas,” from 1933, secured the highest bid at auction: $72,000 (all figures include sales premiums). The Art Deco master’s interpretation of Nectar, the wine deliveryman for the Nicolas firm, has appropriately become an advertising icon—but this particular poster is the only known copy of the design with letters. Loupot also stunned poster lovers with two of his earliest and previously unknown lithographs: “Parfums Naturels / Parrot” and “Parfums Naturels / Butterflies,” both from 1916, sold for $3,840 and $5,520, respectively. The artist also caused a stir with the divine “Au Louvre” from 1923; this variant, without letters, was won for $15,600.

This auction included a very notable Art Deco design: Guillermo Laborde’s 1930 “1er Campeonato Mundial Football / Uruguay,” which promoted the first ever FIFA World Cup in Montevideo. The charming design combined with the historical significance of this work made for a very desirable collector’s item. The poster exceeded its estimate of $2,500-$3,000 with a winning bid of $8,400.

Luciano Achille Mauzan inspired further ardor for uncommon works of the 1920s and 1930s. This auction featured two of his never-before-seen posters for French perfume—and his image of a flirtatious lady leaning over a dramatically oversized rose spurred competitive bidding. “Brixia / Crème et Poudre à la Rose,” from ca. 1924, also surpassed its estimate of $7,000-$9,000 for a total of $13,200.

Similarly, Marcello Dudovich proved his prowess with early 20th century lithographs, especially his large-scale works. His theatrical still life, “Marca Zenit / G. B. Borsalino,” from 1911, was swept away for $14,400; the intoxicating “Cordial Campari,” from 1914, earned a grand $21,600.

As always, Alphonse Mucha’s lush decorative works were in high demand, and in particular, his impressive theatre designs for Sarah Bernhardt were quite coveted. His celestial “La Dame aux Camelias,” from 1896, was won for $28,800, followed closely by his 1899 “Hamlet” which fetched $24,000. And his beloved “Moët & Chandon” from 1899 proved its lasting desirability with a winning bid of $26,400.

The Belle Epoque prevailed with Henri de Toulouse-Lautrec, whose iconic 1896 design, “Troupe de Mlle Églantine,” can-canned away to the tune of $31,200. The same amount was pledged to his sensitive 1895 portrait, “May Belfort”—and Belfort’s partner, the English dancer May Milton, transfixed collectors in Toulouse-Lautrec’s 1895 portrayal. This variant of “May Milton” included a banjo-playing clown as a remarque and was signed and numbered from an edition of 25 copies, earning a $48,000 winning bid.

Modern and contemporary posters also had their share of the limelight. A very rare French promotion for “King-Kong,” from 1942, encouraged an $18,000 win. The whimsy of Keith Haring delighted as ever; his 1985 poster, “New York is Book Country,” sold for $1,920, and the infectious energy of his 1984 “Keith Haring at Tony Shafrazi Gallery” earned $1,440.

Poster Auctions International’s next sale will be held in New York on October 27, 2019. Consignments are accepted until August 1, 2019.