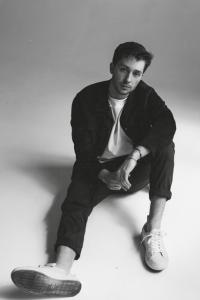 Get it HERE via Disruptor Records.

Emanating sweetly stoned soul from the tail end of the weekend, “hungover sunday” slinks forward on softly plucked clean guitar between pillow-talk confessions: “I drank too much and I feel kind of funny. I can’t get up. I’d rather do nothing with you girl.”

It proves intoxicating, inimitable, and irresistible all at once—just like everything he does.

The single arrives on the heels of “Come Around” his collaboration with Hoodie Allen. In less than two weeks, it impressively clocked over 1.3 million Spotify streams and counting.

Additionally, his last solo single “head first” continues to close in on 1 million Spotify streams in addition to garnering universal praise. Billboard dubbed it, “bouncy,” and Atwood Magazine claimed, “With a mesmerizing and soothing vocal timbre combined with story driven lyrics fans from across the whole world are grasping to the music and French’s message.”

“hungover sunday” hints at more to come from Christian soon, like his upcoming EP and first headlining tour – both titled: bright side of the moon. Tickets On-Sale NOW

Be on the lookout for more surprises! Especially if you’re in the Los Angeles area – Christian is hosting a Hungover Sunday Brunch on July 21st. More details coming soon.

For now, enjoy the best sort of musical hangover with Christian French.

About CHRISTIAN FRENCH:
Self-taught and self-started, Indiana native Christian French went from posting acoustic covers on Soundcloud in high school and while attending Indiana University, to collaborating with producers such as Triegy and GRAMMY® Award-nominated Dru Decaro and touring with the likes of Chelsea Cutler and Quinn XCII. He landed a hit on Spotify’s US Viral 50 with “Fall For You.” Meanwhile, the single “By Myself” generated 19 million streams within a few months’ time. As his 2018 EP natural colors picked up steam, his monthly listenership on Spotify averaged over 1.9 million fans.