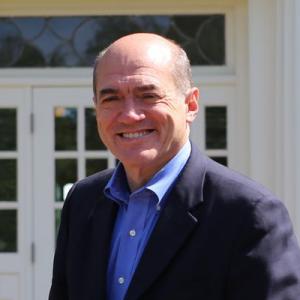 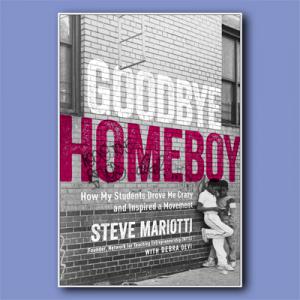 Steve Mariotti is the founder and former president of the global nonprofit Network for Teaching Entrepreneurship (NFTE), and a prominent advocate for the transformative power of entrepreneurship and entrepreneurship education in low-income communities worldwide.

Goodbye Homeboy: How My Students Drove Me Crazy and Inspired a Movement, Marioitti’s memoir of his early career as a public high school teacher and the founding of NFTE, will be published August 6th.

In 1981, Mariotti was mugged by a group of five young teenagers. The incident took place in front of hundreds of people in broad daylight, and no one intervened. Mariotti suffered from severe PTSD, until he met with Dr. Albert Ellis, an influential psychologist and developer of rational emotive behavior therapy, who helped Mariotti understand the irrational beliefs that led to his distress.

“He told me to write down the sentence playing in my brain,” recalls Mariotti. “I wrote: ‘I am not a worthy person because I did not fight back against an attack by five young teenagers, and I cried in public, and I feel humiliated.’”

Under the direction of Dr. Ellis, Mariotti had to write a new, healthy sentence, and write it a thousand times: “I am a hero because, based on my reaction, no one, including five young teenagers, were injured.’”

Unfortunately, it was only a temporary cure, Dr. Ellis had told him; the negative sentence is always lurking and preparing to come back.

“Dr. Ellis told me: ‘I want you to be a teacher in the worst schools with the most troubled kids in New York City,” Mariotti remembers. “He was so confident, so overwhelmingly certain, I started to think he was right.”

And so, in 1982, Mariotti became a special education teacher for kids who could not return to public schools: kids who had committed crimes, were in foster care or had dropped out. His assignment was to reach out to as many of these kids as possible and enroll them in a special program.

“My first day I have 34 kids. I’m supposed to have 12. Three of the kids had just gotten out of Rikers Island and were threatening me and coming toward me. This is my worst nightmare. So I step outside. I start to pray. I look down. And I see my watch.

“And this was the moment that changed my life.”

Mariotti knew a little about business: he had an MBA; he’d been a treasury analyst for Ford; and he started his first business when he was only 12 years old.

“I took my watch off and stormed back into the classroom, like a Broadway actor entering the stage,” recalls Mariotti. “I yelled: ‘What would you pay for this?’

“They all went as silent as an Oxford seminar. Then they began to discuss it. It was like a scene out of a movie!”

Mariotti discovered he could motivate even his most challenging students by teaching them to run a small business.

And so began Mariotti’s journey of teaching entrepreneurship to low-income students, with or without learning issues. The experience inspired Mariotti to establish Network for Teaching Entrepreneurship to empower at-risk youth to create pathways out of poverty.

Mariotti founded NFTE on a public high school teacher's salary in 1987. Today, the organization is a leading global provider of entrepreneurship education for low-income youth from Chicago to China, operating in 10 countries and serving nearly one million young people to date.

“One thing I always told my students: you gotta think big!”

CUTV News Radio will feature Steve Mariotti in an interview with Doug Llewelyn on July 16th at 11am EDT and with Jim Masters on July 23rd, July 30th and August 7th at 11am EDT

Listen to the show on BlogTalkRadio

For more information on Network for Teaching Entrepreneurship, visit www.nfte.com