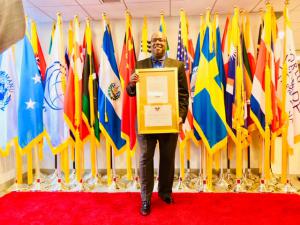 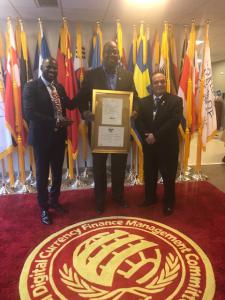 NEW YORK, NEW YORK, USA, July 22, 2019 /EINPresswire.com/ — Dr. Clyde Rivers Received his 2nd Presidential Award at the United Nations Association of El Salvador in New York City, Dr. Rivers received the Presidential Award for his volunteer service to the citizens of the United States of America. He was at the United Nations practicing his Culture of Honor, honoring other great leaders from throughout the nation who are serving their communities, when he received this non-political award.

Dr. Rivers also received this prestigious award in 2017. The Presidential Lifetime Achievement Award is given to those outstanding citizens who volunteer over 4,000 hours of service to the nation. “These things don’t just happen. It is a humbling experience,” says Dr. Rivers about receiving the award for a second time.

Others that have received this prestigious award include but are not limited to, Frank Shankwitz, Founder of Make A Wish Foundation the Make-A-Wish Foundation has grown to 64 chapters in the United States, 36 International chapters, covering 5 continents, and has granted over 300,000 wishes worldwide, with a wish being granted somewhere in the world on an average of every 38 minutes.
Zachary "Zach" L. Bonner is an American philanthropist and founder of the non-profit charity Little Red Wagon Foundation.[1][2] Bonner received the Presidential Service Award in 2006.
When he was seven years old, he founded the organization to aid the 1.3 million homeless children in the United States.
Samuel Truett Cathy Cathy had a Leadership Scholarship program for Chick-fil-A restaurant employees, which has awarded more than $23 million in $1,000 scholarships in the past 35 years. In 1984, Cathy established the WinShape Foundation, named for its mission to shape winners. In addition, Cathy fostered children for more than 30 years

Dr. Rivers brings awareness of “World Civility” as a way forward in the areas of economics and development to the nation and the world. He is the Spokesperson for World Civility Day and the Co-Founder of the Golden Rule Civility Initiative. Dr. Rivers is known for promoting Civility throughout the world. He advises, “if you do not have civility you will never have business development.”

Dr. Clyde Rivers,is the founder of I Change Nations, Dr. Rivers is the acting Representative to the United Nations – New York for the Interfaith Peace-Building Initiative (IPI) and the United Nations Department of Public Information (DPI Dr. Rivers is the acting Ambassador and the Director of the North American Division of the Golden Rule International
Dr. Clyde Rivers is the Spokesperson for the World Civility Day, Community Civility Counts Initiative, Dr. Rivers has been honored internationally and has received numerous awards. Dr. Rivers is the recipient of the Danny K. Davis Peace Prize 2017, U.S. Congressman of Illinois. This annual Congressional Award given for excelling in his field and making a difference in people’s lives.In 2017 Dr. Rivers was given the Title of Don/Sir Dr. Clyde Rivers as he was Knighted into the original Kingdom of Guatemala, and the great city of La Antigua the first city established by the Spanish Monarchy. Knighted by Lord EDUARDO L. PRADO S. the Commodore De Santiago De Los Caballeros De La Antigua Guatemala Dr. Rivers is the recipient of an Honorable Mention for the American Civic Collaboration Award 2017 – Celebrating Partnerships that Strengthen America Dr. Clyde Rivers is the Honorary Ambassador at Large for the Republic of Burundi, as appointed by H.E. President Pierre Nkurunziza and Special Advisor to President Pierre Nkurunziza, President of Republic of Burundi Africa.
Dr Rivers has honored some of the following presidents to help bring peace and honor around the world, They include but are not limited to: President Yoweri Museveni, of Uganda – Honored for his great leadership in establishing and maintaining peace in his country
First Lady, Janet Museveni, of Uganda – Honored for the AIDS awareness policy ABC (Abstinence, Birth Control, and Contraception) an ever-present battle for the health of their people
President Pierre Nkurunziza, of Republic of Burundi – Honored for his efforts to bring peace to a 12-year civil war between the two major tribes in his country. As well as First Lady Denise Nkurunziza, Republic of Burundi Honored for her efforts to bring a better life to the people of her country.
Former President Olusegun Obasanjo, of Nigeria – Honored for the Anticorruption policies he implemented in Nigeria.
Former President Wolde Giorgis, of Ethiopia – Honored for his efforts to build a better environment in his country.
Dr. Vanda Pignato – Former 1st Lady of El Salvador, was honored for her tireless efforts in protecting for women’s rights in the Republic of El Salvador.
Dr. Kenneth David Kaunda – Former President of Zambia, was honored for his life’s work to establish peace in Zambia and on the continent of Africa.