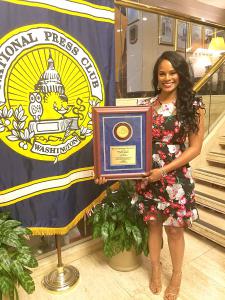 WASHINGTON, D.C., USA, July 24, 2019 /EINPresswire.com/ — The Society of Professional Journalists (SPJ) has awarded the Sigma Delta Chi Award “for excellence in professional journalism” to multimedia journalist Germany Kent for Online Independent Deadline Reporting. Kent, who is widely known for her achievements in digital media and interdisciplinary innovation, has become the first African-American woman to receive the award in this category.

Kent was honored at a special banquet event attended by an elite crowd of journalists representing some of the most well known media organizations in the world. The banquet, hosted by NBC News chief White House correspondent Hallie Jackson, was held at the National Press Club in Washington, D.C.

The Sigma Delta Chi Awards are some of the most respected and prestigious awards given to journalists. The award win commemorates an impressive rise for Kent. This year, the Society says 77 winners were determined from more than 1,300 submissions.

Kent’s work, titled “Tragedy in Thousand Oaks,” covers the aftermath from the massacre that occurred at the Borderline Bar & Grill in Thousand Oaks, California, northwest of Los Angeles, in November 2018. In the wake of the deadly mass shooting where a former Marine opened fire on a packed bar, killing 12, including college students and a veteran sheriffs sergeant, the story highlights a palpable concern for victims and details the impact of violence, crime, disaster, and other trauma with exclusive footage and exclusive interviews. The news compilation is being hailed as one of the best stories of the year for its compelling journalistic content and technical visual quality.

The award winning body of work was shot, written, edited, produced and published by Kent. The journalism and radio-television-film producer in her unique role in communication and media has worked as a freelance reporter based in Los Angeles since 2011 producing web content, and news applications through vivid interactives and storytelling to highlight stories that matter in the community and the industry.

As a creative talent, Kent has remained on the cutting-edge of research and practice in journalism through scholarly, and professional avenues with many contributions to news and media using her influence to make connections through public relations, marketing, video production, digital enterprises, strategic communication and leadership. She has been named an expert in social media etiquette and been an expert consultant to Fortune 500 companies on topics including media ethics, social media and the impact of new media.

This is not the first time Kent has been recognized nationally. Kent previously represented the state of Tennessee in the Hal Jackson’s Talented Teens pageant – a globally competitive pageant in New York where she won the title “Miss Personality” out of hundreds represented from different regions of the world. More recently, the multi-talented multi-cultural media powerhouse has won national acclaim for her literary work. Kent is the award-winning author of the national bestseller “You Are What You Tweet”.

In addition to being ranked in the Top 50 on SEO.com’s list for most socially shared articles, Kent’s writing has been featured in a variety of industry journals, newspapers, and online portals. Her work has appeared in such publications as Fast Company, Inc. Magazine, AOL, The Examiner, MSN, The Dallas Morning News, Yahoo Business, Hartford Business Review, Bloomberg, and Forbes, to name a few.

Kent has helped to lead the way for inspiring journalists with her media mentoring program, in addition to helping many others Segway into the entertainment industry. The popular media magnet has been invited to speak throughout the nation at schools, universities, workshops, forums and diversified events, even offering ways to prevent cyberbullying at the journalism social media summit while speaking at the prestigious Stamps Scholars National Conference at Georgia Tech. In 2017, Soledad O’Brien’s team tapped Kent to serve as a branding panelist at the National PowHERful Conference, co-sponsored by The Sara Blakely Foundation.

Kent is also well known for her contribution to community organizations, and her dedication to youth empowerment. The respected businesswoman has won national and international accolades for her philanthropic efforts, which are closely tied to her social change, activism, and media literacy commitments, along with numerous regional and local honors.

In 2018, Kent was named to the LA Business Journal’s List of Powerful Women Making A Difference in Los Angeles. Over the years she has been a stand out in digital marketing and brand attachment and has blazed trails while navigating the digital world. In 2015 Onalytica named Kent on its list of most influential individuals and brands. She has also been named in the Top 100 experts to follow; Top 100 social media power list; as well as the Top 100 media marketing leaders by Digital Scouting,

From reporting in Tinseltown, Kent has achieved an impressive media portfolio with more than 200 high-profile interviews with entertainers, sports moguls, humanitarians, politicians and newsmakers. Kent’s resume extends beyond that of a journalist and media executive. You’ve probably seen her on your television without realizing it. The Mississippi native has starred in multiple commercials for global brands including Disney, AT&T, Carrier, Coors Light, Coca-Cola, eHarmony, Dove, Target, Verizon, Nike, and many others.

The Sigma Delta Chi Awards recognize the best in print, radio, television, newsletters, art/graphics, online and research, and are open to any work published or broadcast by a U.S. or international media outlet.