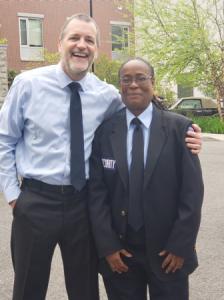 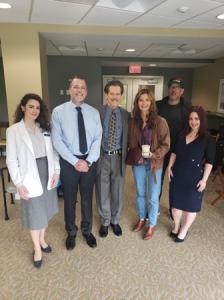 Mount Vernon, N.Y. (July 30, 2019) – Wartburg, a premier senior care and housing provider in Mount Vernon, New York, was the backdrop during filming of the first Season of Showtime’s original series, City on a Hill. The episode featured various sites throughout Wartburg’s historic 34-acre campus and will air on Sunday, August 3 and 29 at 10 p.m. EST.

City on a Hill, set in Boston during the crime-ridden 90’s, stars Kevin Bacon as Jackie Rohr, a corrupt yet venerated FBI veteran trying to keep the status quo. He forms an unlikely alliance with DeCourcy Ward, played by Aldis Hodge, an assistant district attorney who has made a reputation for himself for proposing corrupt cops in jail.

Over the course of several days, Wartburg hosted the cast and crew of City on a Hill including stars Kevin Bacon and Jill Hennessey with over 40 crew members of Possible Productions, Inc. Wartburg’s campus will be featured in Episode 8 of Season 1 and will feature a special appearance of Wartburg’s own Sheila Walker as a security guard.

“Wartburg’s blend of modern and historic buildings and room for various staging activities has always made it an ideal location for location work,” said Wartburg’s President & CEO David J. Gentner, Ed.D. “The cast and crew of City on a Hill were extremely professional and a real pleasure to host. It was great to see how a series like City on a Hill is filmed.”
About Wartburg
Wartburg, located in Westchester County, NY, offers integrated, comprehensive senior residential and healthcare services. Unlike conventional retirement communities, Wartburg provides a wide range of services to both residents living on their beautiful 34-acre campus and people in their own homes. From independent, assisted living and award-winning nursing home care to inpatient/outpatient rehabilitation, home care and adult day care services, their continuing care approach has earned them a trusted reputation in Westchester. Wartburg also provides caregiver support at every stage with an array of options to find the level of care that considers the whole family.
Most recently, Wartburg received the 2016 Eli Pick Facility Leadership Award from the American College of Health Care Administrators and the 2015 Legacy Award from the Westchester County Chapter of the Links. In addition, Wartburg was named one of the "Best Nursing Homes in New York State" by U.S. News & World Report for the eighth consecutive year in 2018.