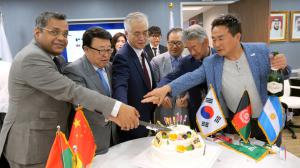 SEOUL, SEOUL, SOUTH KOREA, September 11, 2019 /EINPresswire.com/ — The much anticipated advisory and capital market solution company WTIA (World Token Issuing Alliance) in Asia has finally launched its own block-chain based technology and crypto exchange platform with native currency RXR at a stunning opening price of US$0.36c which is remarkable having seen the roller coaster ride in 2018.

The Global launch of the cryptocurrency platform exchange (www.wtiax.co) took place on September 9, 2019, at 09:00 GMT (5 p.m. Korea time) amidst great participation via video conferencing by many global VIP’s and distinguished guests from across more than 30 countries.

The first round of trading was opened to Singapore, India, Cambodia, Sri Lanka and China, including South Korea at 09:00 hrs GMT /UTC on September 09, 2019. Chairman Keun-Young Kim personally announced the WTIA ‘World Code of Conduct” at this Global Launch Ceremony which was accepted by the Founders, Members of The Board, Distinguished VIP’s and Guests globally. The six points encapsulating this code and making WTIA truly unique in today’s world are
1. We will not be jealous of each other
2. We will do our best to help each other
3. We will keep a secret
4. We will share our profits
5. We will support children and poor people in the world.
6. We will initiate new Smart Job Creation to the world.

As part of WTIA on-going global events, the next one to be held soon is The KOREA PEACE & UN Summit, on 24October 2019, On this day European and Latin American countries will also open exchanges, and its first STO Gold Coin “GCC1” and Hotels & Resorts backed Coin “MHR” will be launched worldwide on that day, added Minsoo Kaycee Kim – President and CEO, WTIA.

Rohan F. Britto, Managing Director, WTIA said that much of the revenue generated by this worldwide activity will be provided to people living in poor conditions around the world, especially children, through donations from the Foundation and with the help of Global Partnerships Forum, New York in promoting the UN’s 2030 Agenda for Sustainable Development around the world.

As a first step in its implementation, WTIA signed a letter of support to help nine-year-old soccer genius Benyamin from Afghanistan along with Chairman Xu of China's Super Capital Chain, and presented him with South Korea's Kim Bong-hak soccer shoes, which were worn by the North Korean Women’s Soccer team that won the FIFA under-17 World Cup in 2008.

The Heart of WTIA’s main goal is SMART JOB CREATION which will use technology not just to alleviate lives of people by working closely with real-world projects but also generate jobs which is the greatest need of the hour across every country globally concluded Yong Ki Kim, Vice Chairman, WTIA

About WTIA: www.wtia.io
The World Token Issuing Alliance (WTIA) is the advisory and capital market solution of some of the biggest real-world block chain projects in the world. Projects include sovereign-level assetization programs, utility-token driven business models for listed companies, tokenized infrastructure securities, high technology applications and much more. Governments and large corporations seeking a new paradigm in management, asset utilization, business development and stakeholders engagement have joined the WTIA.