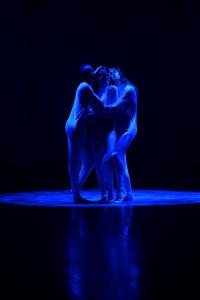 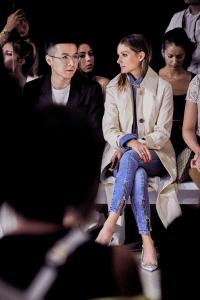 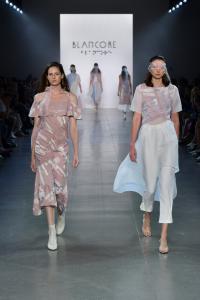 Marie Claire China publisher Xiaodong Zhang, also in attendance, said of the show “This is a very sophisticated, well-developed collection for such a young brand, I look forward to seeing how they will grow.”

Blancore’s inspiration for SS20 is “water” in all its life-forms. Hauntingly mysterious music heralded a breathtaking opening sequence, three performers in white bodysuits appeared through the haze as lighting effects created a rippling blue pool in the middle of the runway.

“Water can be ubiquitous and ethereal, vanishing without a trace,” Yalan, Creative Director of Blancore, explained.

Blancore believes water defines the existence of every creature, infusing everything in every realm with vitality, representing limitless possibility everywhere.

Yalan was born to a family that had always cherished and prioritized fabrics and clothing. From a young age, she kept a close eye on the fashion kingdom her father had forged. Creating a brand, in fact, was already Yalan’s dream at the age of seven. Growing up in the fashion industry, surrounded by its complexities, intricacies, and rewards, Yalan was focused and particular from the start in her quest to identify a brand that could make her heart blossom. Her studies with American scholars and her passionate pursuit of art and art history inspired Yalan to establish a brand in the United States rather than participate in the management of the family business.
Thus Blancore was born.

Exceptionally skilled at sourcing inspiration from her own experiences and her perceptions of life’s details, Yalan and her line integrate business-management acumen with a sensitive feel for contemporary design. Graduated from Ohio State University, the young founder combined American style and minimalism with elegantly fine French “deconstruction,” applying both these conceits to her design creations, producing a beautiful and alluring “second skin” for men and women.

Blancore designs each of its creations for individuals who are confident in themselves, positive about existence, willing to explore all dimensions and possibilities in life. The SS20 show acted on this mandate, with a truly diverse cast of models, featuring a gender fluid model in the opening and one of several models of color closing the show.

“We chose New York Fashion Week for our debut not only because Blancore was born here, but also because New York is unique in many ways—especially in the way that it embraces all colors of people and all walks of lives in its arms.”—said Youting, CMO of Blancore.

To date, Blancore’s monthly sales revenue has reached $100k, and the company is now gearing up for opening its first multi-purpose showroom in lower Manhattan. This summer, Blancore opened its first franchise store in a top-tier shopping mall in Chengdu–one of Western China’s most populous cities–and inked deals with more than 30 showrooms worldwide.

Blancore describes the Spring/Summer 2020 debut as its tribute to American fashion. “We believe that with the international influence and resources New York Fashion Week offers, Blancore will have exponential growth after our debut here,” said CEO Linfei.

Within the next three to five years, Blancore, now with offices in Milan and Shanghai, plans to enter 34 capital cities in China, with at least 50 stores opening in the Chinese mainland. It will also break into the markets of Canada, Japan, South Korea, Italy, the UK, France, Spain, as well as Australia, opening stores, joining hands with established showrooms, and working with distribution channels in all these regions.