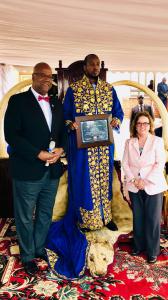 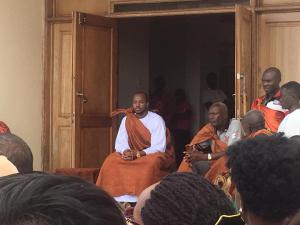 it’s amazing to see that the World’s First Civility King is a man that looks out for his people and the environment.”
— Amassador Dr. Clyde Rivers

FORT PORTAL, UGANDA, September 18, 2019 /EINPresswire.com/ — I Change Nations honored King Oyo of the Kingdom of Tooro as the Worlds First Civility King. World Civility Global Spokesman, Dr Clyde Rivers and delegation from the United States traveled all the way to the Kingdom Of Tooro in Fort Portal, Uganda, Africa to Award King Oyo with a World Civility Leadership Award. The world’s youngest King to ever occupy a throne. He took the throne of the Kingdom of Tooro at the Age of three. He has occupied the throne for 24 years and he is currently 27 years of age. This past Sept 12th was the 24th Coronation Anniversary and ceremony for King Oyo. It was truly a great to watch the entire country celebrate this amazing King.

Dr. Clyde Rivers and his delegation had the privilege to travel with King Oyo's entourage and see the work he has done in the development of his Kingdom. We went to the hospital in Fort Portal, where King Oyo made it possible for hundreds of people have free eye surgery as well as eye examines and hundred of people received eye glasses to correct their vision. The people where very grateful to King Oyo for this service.

The king has an environmental program to preserve the environment for the future generations of his kingdom. The people where cleaning the River from plastic bottles and other waste that is damaging the environment. Dr.Rivers said “it’s amazing to see that the World’s First Civility King is a man that looks out for his people and the environment.” King Oyo, is that man the First King in the History of the World to win our First World Civility Award.

He was given a special honor from the World Civility Global Spokesman, Dr. Clyde Rivers to be the First King to look for a new Civility King every year from all the kingdoms of the World. King Oyo will then pass the Civility Leadership to a kingdom of his choosing . He will choose a new Kingdom every year he reigns as the King. His Civility legacy to make the World a better place.

I Change Nations is a Culture of Honor System, the organization is committed to bringing back the lost art of honor by building a Culture of Honor that recognizes individuals throughout the world who have exemplified extraordinary humanitarian efforts to effectively change nations. We honor people and organizations that believe every life is valuable and is created to bring a contribution to the world. ICN is the largest “building cultures of honor” network in the world.

I Change Nations was founder by Dr. Clyde Rivers, Dr. Rivers is the acting Representative to the United Nations – New York for the Interfaith Peace-Building Initiative (IPI) and the United Nations Department of Public Information (DPI Dr. Rivers is the acting Ambassador and the Director of the North American Division of the Golden Rule International
Dr. Clyde Rivers is the Spokesperson for the World Civility Day, Community Civility Counts Initiative, Dr. Rivers has been honored internationally and has received numerous awards. Recently Dr. Clyde Rivers, received his 2nd Presidential Award for 2019 at the United Nations Association of El Salvador in New York City, Dr. Rivers received the Presidential Award for his volunteer service to the citizens of the United States of America. In 2017 Dr. Rivers won the United States Presidential Life Achievement Award for over 4,000 hours of serving the nation and humanity Dr. Rivers is the recipient of the Danny K. Davis Peace Prize 2017, U.S. Congressman of Illinois. This annual Congressional Award given for excelling in his field and making a difference in people’s lives.In 2017 Dr. Rivers was given the Title of Don/Sir Dr. Clyde Rivers as he was Knighted into the original Kingdom of Guatemala, and the great city of La Antigua the first city established by the Spanish Monarchy. Knighted by Lord EDUARDO L. PRADO S. the Commodore De Santiago De Los Caballeros De La Antigua Guatemala Dr. Rivers is the recipient of an Honorable Mention for the American Civic Collaboration Award 2017 – Celebrating Partnerships that Strengthen America Dr. Clyde Rivers is the Honorary Ambassador at Large for the Republic of Burundi, as appointed by H.E. President Pierre Nkurunziza and Special Advisor to President Pierre Nkurunziza, President of Republic of Burundi Africa.

For more information about I Change Nations. the World Civility Award as well as the work that Ambassador Dr. Clyde Rivers is doing go to:
www.ichangenations.org