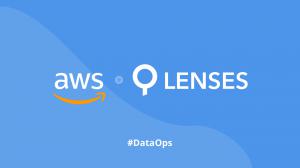 DataOps on Kafka with AWS MSK and Lenses.io

SAN FRANCISCO, CALIFORNIA, USA, October 1, 2019 /EINPresswire.com/ — Lenses.io the leading DataOps platform for real-time data, announced at the Kafka Summit San Francisco 2019, its partnership with Amazon AWS and the release of Lenses 3.0 to further help organisations in building and maintaining a secure and reliable streaming data platform based on Apache Kafka.

Apache Kafka is increasingly being adopted across multiple products and use cases. Self-managing powerful, yet complex and highly distributed infrastructure such as Kafka is now a commodity to be consumed. Organisations are turning to the likes of Amazon AWS MKS and ecosystem of services for data infrastructure and modern DataOps tooling such as Lenses to enable them to accelerate the delivery of new data experiences.

“With AWS MSK for infrastructure and Lenses for DataOps, the barrier for organizations to find the right talent, as well as the cost and risk, is now minimized meaning data projects can be delivered in days instead of the typical 9-month cycle that we’ve seen. With Lenses as the secure data access layer with data governance capabilities also results into a stronger data compliance and data ethics” said Antonios Chalkiopoulos, founder of Lenses.

Clients delivering DataOps with Lenses include Komatsu, Namely, Generali, Workable and Vortexa, a startup disrupting the energy markets adopting Lenses and Amazon MKS as part of its data delivery infrastructure.

“Amazon AWS MSK enables our team to provision and manage Kafka easily and cost-effectively. With Lenses on MSK, we can now fully utilize Apache Kafka and use familiar SQL and Streaming SQL to build and deploy application logic. Enterprise security and monitoring extends our operational capabilities across all micro-services and real-time data pipelines on Kafka with Kubernetes” said Maksym Schipka, CTO of Vortexa, the leading oil cargo analytics platform

“With this combination, our developers and engineers enjoy unprecedented visibility into infrastructure and data and can iterate quicker by avoiding spending time fiddling with the underlying technologies. We have been able to dramatically accelerate the delivery of new exciting real-time digital experiences to our customers” added Maksym Schipka.

The partnership with AWS coincides with the release of Lenses 3.0, that focuses on delivering real-time data, applications via a collaborative user experience and improved data privacy controls. Information about 3.0 can be found here.

Lenses.io is the leader in DataOps software. Enterprises around the globe use Lenses.io to build flexible, scalable, high-speed data infrastructure using modern components such as Apache Kafka and cloud resident data. Lenses.io provides the monitoring, control, debugging, security and self-service required to activate data and leverage its value. With Lenses.io, data and infrastructure engineers work seamlessly together, creating a resilient and comprehensive data platform. Application developers, data scientists, and other data citizens use Lenses.io’s unique self-service capabilities to easily access and deploy data products. Lenses.io is headquartered in London and has offices in New York, The Netherlands and Greece.