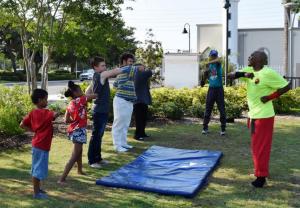 Walter Evans conducting one of his self-defense classes for all ages in downtown Clearwater’s Osceola Courtyard.

I’ve worked with students across the Pinellas County School Board and I’ve had thousands come through my program. Martial arts gives them a feeling of security and confidence.”
— Walter Evans, Shihan School of Survival

CLEARWATER, FLORIDA, USA, October 3, 2019 /EINPresswire.com/ — On September 14th, Walter Evans, the founder of Shihan School of Survival, a nonprofit organization dedicated to teaching martial arts to youth and adults, received an award at the 5th Annual Tampa Bay Charity Coalition Anniversary in the Fort Harrison auditorium in downtown Clearwater, Florida for his 16 years of community service.

“I really enjoyed receiving that award,” Evans told Freedom. “It was my chance to show my students and their families how far an instructor can go with martial arts. I also got to see them enjoy a beautiful meal and the Fort Harrison itself. I’ve been teaching for 16 years now so it felt very nice to be acknowledged.”

Originally from New York City, Evans was inspired to pursue martial arts after hearing stories of his late father; how he was a great fighter and fought in the Korean War. Now nearly half a century later, Evans has earned the title of Shihan, a Japanese word meaning “master instructor.”

When he moved to Tampa Bay in the early 2000s and founded Shihan School of Survival in 2005. Evans started giving lessons as part of after school programs at community centers in St. Petersburg and Tampa. “I’ve worked with students across the Pinellas County School Board and I’ve had thousands come through my program,” says Evans. “Martial arts gives them a feeling of security and confidence.”

The Tampa Bay Charity Coalition, which holds bi-monthly meetings in the Fort Harrison’s Crystal Ballroom, was established by the Church of Scientology Flag Service Organization in 2014 and has since grown to over 250 charities in membership.

“I love being able to reach so many students every day,” says Evans who, in his lessons, uses The Way to Happiness, a non-religious common sense guide for better living by author L. Ron Hubbard.

“I found the 21 precepts in The Way to Happiness were very simple and easy to read,” says Evans. His favorite precept is “21. Flourish and Prosper.” Continuing to help his students and youth in his community that is exactly what he intends to do.