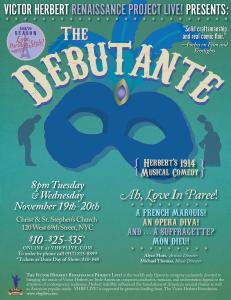 VHRP LIVE! launches an exploration of Love, Parisian Style! with The Debutante, a modern woman with ideas of her own – in the city of light, art and romance!

VHRP LIVE! Is reacquainting New York City with the music of Victor Herbert. To date, the company has served up 15 full productions and 5 concerts consisting solely of this composer’s music. With Season Six the Company launches an exploration of Love, Parisian Style! Each offering features a modern woman with definite ideas of her own – a debutante, a diva and a dreamer – in Paris, the city of light, art, and romance! The Fall kick-off will be Herbert’s 1914 musical comedy, The Debutante, on Tuesday, November 19th and Wednesday November 20th, 2019 at 8pm.

Being engaged at birth proves awkward for Elaine, The Debutante, and Philip, as they come of age with their own exotic ideas of an ideal partner. There’s a French Marquis for her, and a Russian Opera Diva for him. The Debutante is set in 1914 as Cubism, Art Deco and Women’s Sufferage were racing throughout the world of art and culture. Spice or Comfort – that’s the question as deception and mistaken identity abound when the whole lot of colorful characters attempt to sort it out in Paris. “What Victor Herbert does with a Cubist Opera should not be missed,” says Alyce Mott, VHRP LIVE! Artistic Director and Librettist.

ADVANCE TICKETS ON SALE ONLINE:
Specially priced tickets for THE DEBUTANTE are $10-$35 available online at www.VHRPLIVE.org or tdf.org up until noon on performance days.

The Victor Herbert Renaissance Project LIVE! is the world's only company exclusively devoted to Victor Herbert, the Irish-American conductor and musician who composed innovative scores for early Broadway, as well as classical and popular music. Herbert contributed powerfully to the emergence of an authentically 20th century American sound; and did so lavishly, producing 43 operettas, 2 operas, and innumerable compositions for orchestra, band, cello, violin and piano.

Supported by generous funding from The Victor Herbert Foundation, VHRP LIVE! is a registered 501(c)(3) corporation founded in 2014 by the company’s Artistic Director Alyce Mott, a leading Herbert historian and librettist and Music Director Michael Thomas.