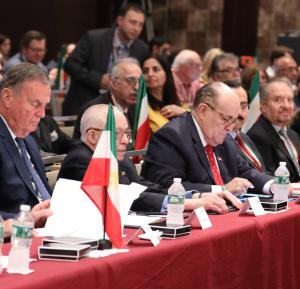 Rassoul (Ross) will be sorely missed, but his legacy will live on until Iran is free.

Rassoul led many initiatives and campaigns in defense of human rights and the establishment of democracy in our native land Iran. He ade tremendous contributions to OIAC’s projects.”
— Dr. Sadeghpour

It is with great sadness and a heavy heart to announce the loss of one of our founding members, Mr. Rassoul Amin Mansour (Ross Amin), who passed away on October 3, 2019 after a long bout with brain cancer. Our thoughts and prayers are with his family and loved ones. The entire board of Organization of Iranian American Communities (OIAC), Advisory Board, and our chapters across the United States mourn his passing. He served on OIAC’s board from its inception and left a legacy of an unrelenting commitment to, and incredible passion for, a free Iran.

Rassoul was born in 1952 in the city of Isfahan in central Iran and came to the United States to pursue his higher education. He was a graduate of North Texas State University, majoring in Industrial Engineering, while actively engaged in the Iranian student movement in the U.S. which opposed the Shah’s monarchic dictatorship. He later moved to New York City and then to Sacramento, CA, where he became a very successful businessman.

After the fundamentalist mullahs took over in Iran, Rassoul became increasingly active in exposing the atrocities perpetrated by the Iranian regime. After June 1981, when Khomeini turned a peaceful demonstration by half-a-million supporters and sympathizers of the main Iranian opposition group, the Mujahedin-e Khalq (MEK) into a bloodbath, Rassoul stepped up his activities, devoting most of his time to activities aimed at informing the public about the flagrant violations of human rights in Iran.

He quickly emerged as one of the most vocal and active members of the Diaspora and became one of the most effective community organizers in New York and northern California. At the same time, he was among the most prominent Iranian business leaders.

His tireless work contributed significantly to garnering the three-decade-long bipartisan support for the Iranian Resistance in the United States Congress. He was particularly active in the worldwide campaign to protect the lives of Iranian opposition based in camps Ashraf and Liberty, Iraq where some 3,000 members of the MEK were being repeatedly attacked by the Iranian regime and its proxies.

In addition, Rassoul led many initiatives and campaigns in defense of human rights and the establishment of democracy in our native land Iran. He was a brilliant mentor and made tremendous contributions to OIAC’s projects throughout the years.

His dedication to the cause of freedom and justice is recognized by the Iranian Diaspora, particularly across the Iranian American communities. As we celebrate his life on Saturday October 12th, we recommit ourselves to his dedication and efforts for a free, democratic, secular and non-nuclear republic in Iran.

Rassoul will be sorely missed, but his legacy will live on until Iran is free.