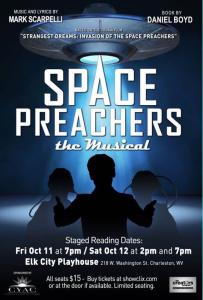 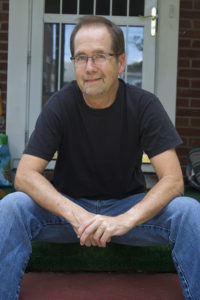 “To see this story live on in musical form is fantastic,” said Boyd.“Mark and Adam have been excellent to help me breathe new life into this project that has long held a special place for me. Audiences can expect the same level of fun and camp from the original film, with a 21st century musical makeover.”

The much loved original movie “Strangest Dreams-Invasion Of The Space Preachers,” became a late night cult classic in the early 1990’s on the USA Network and at midnight movie screenings nationwide. The sci-fi comedy centers on a beautiful blonde space alien who, with the help of two city dwellers vacationing in rural West Virginia, take on a group of aliens who have disguised themselves as radio evangelists in order to take over the world.

The original movie is now available on Amazon Prime, YouTube and other digital streaming platforms under the cult classic Troma Entertainment banner.

The live stage reading October 11th and 12th will feature many of the film’s actors reprising their original roles. Set in the backwoods of West Virginia, the plot of the play follows the movie closely, and centers on a possible alien invasion that is turning townspeople into mindless automation.

Daniel Boyd is an acclaimed filmmaker (“Chillers,” “Paradise Park”, “Strangest Dreams"), a two-time television regional Emmy nominee and a multi-nominated graphic novelist (“Chillers”, “CARBON,” “SALT”). In 2017 Boyd and Gold/Platinum albums recipient and NPR’s Mountain Stage co-creator and host Larry Groce collaborated on the full staged musical adaptation of his movie “Paradise Park,” commissioned by Theatre West Virginia. The show played for two seasons to rave reviews. During his tenure at WVSU, Boyd taught around the world including in Tanzania as a three-time Fulbright scholar. He continues to serve as Artist in Residence at WVSU’s Economic Development Center in Charleston.

Mark Scarpelli grew up in Connecticut but for many years has been a Charleston WV based composer/musician. He studied music composition under Joseph Schwantner at Eastman School of Music in Rochester, New York. Four operas, 19 musicals, six ballets, two Masses and several musical adaptations and arrangements are in his compositional catalogue.

Adam Bryan is the director/manager of the Alban Arts and Conference Center in St. Albans. He is a graduate of California University of Pennsylvania and has worked in the theatre at such places as Tecumseh! and Theatre West Virginia. He has taught several theater classes, including at Theatre West Virginia’s Professional Training Academy and at the Alban Arts Academy.

Tickets for the live reading of “Space Preachers: The Musical” cost $15 and are available at showclix.com. Any remaining tickets will be sold at the door.