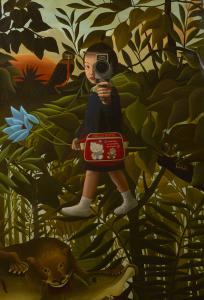 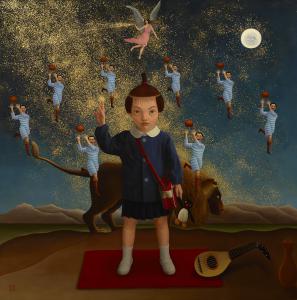 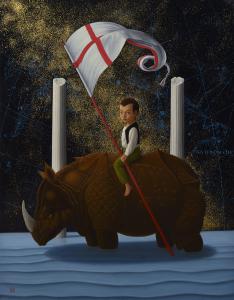 I try to envision vast imaginary landscapes fenced in by historical masters, in the likes of Rousseau and Delvaux, as semi-realistic public spaces.”
— Mitsuru Watanabe

NEW YORK CITY, NEW YORK, UNITED STATES, October 8, 2019 /EINPresswire.com/ — This Fall, New York art gallery Rehs Contemporary will present new work by Japanese artist Mitsuru Watanabe. On public view for the first time in the United States, Watanabe’s compositions are both a tribute to and modernization of historical masterworks, while also blending those Western inspirations with his Eastern culture.

Watanabe’s subjects routinely explore the landscapes that inspired Henri Rousseau, sometimes cross paths with creatures from Hieronymus Bosch’s imagination, and occasionally captivate mythological beings as if they were Venus themselves. Stylistically, Watanabe’s realistic approach borders on Surrealism, particularly in the depiction of his subjects – oftentimes his daughters Naoko and Yukiko. The stoic expression they exude gives an intriguing sense of indifference to their grandiose surroundings, and yet while so out of place, they appear so natural – whether they are shown sleeping, bathing, filming, or simply looking directly back at the viewer. There is a playful allusion to the imagination of a child, juxtaposed so elegantly with the seriousness that often goes hand in hand with these historically important works being referenced.

One work in particular, "Naoko Walking in Rousseau’s Forest", wholly embodies this whimsical concept that Watanabe is playing with… on one hand, he sets the scene using a cropped view of the landscape in Rousseau’s iconic "The Hungry Lion Throws Itself on the Antelope" – a dramatic and deadly encounter between a lion and an antelope. At the same time, he prominently features his daughter, Naoko, walking nonchalantly through the commotion with a Hello Kitty bag slung over her shoulder, a large blue lotus flower in one hand, and a Canon camcorder held out in the other as if to be capturing all that surrounds her. The lotus flower in hand alludes to another of Rousseau’s jungle theme paintings, The Dream, giving us the understanding that his subject is not simply visiting a single scene, but venturing through the forest in its entirety. Watanabe uses this subtle detail to contrast with the unwritten rules of fine art – to observe and admire, but not touch. The inquisitive and curious nature of the child, however, has led to one step further than just touching, as she’s gone on to pluck and take the flower with her.

While Watanabe’s compositions may seem like superficial reworkings of well-known paintings, there is something far greater at play here. At the core is a dialogue surrounding the admiration of prestigious works of art and the way in which we connect as viewers. Watanabe’s works force us to consider that personal connection rather than allowing us to fall back on the canons uttered by historians and scholars. As Watanabe himself puts it, “I try to envision vast imaginary landscapes fenced in by historical masters, in the likes of Rousseau and Delvaux, as semi-realistic public spaces… In the world of imagination, everything is accessible and nothing is forbidden.”

Along with "Naoko Walking in Rousseau’s Forest", the gallery will be exhibiting Watanabe’s "Ptolemiac Theory", and "Shiro".

If you would like to request high-resolution images of featured work, please contact Lance Rehs at Lance@Rehs.com.

Rehs Contemporary is regarded as one of the top galleries in New York City and is a platform for new, emerging and established contemporary artists; many of whom have received extensive academic training. The gallery offers high quality works to art lovers of all kinds, from first-time buyers to major collectors.