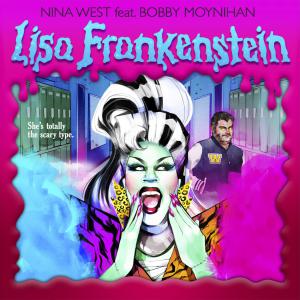 Nina is an impeccable performer and an amazingly hilarious person to boot. When Nina calls and asks you to help on her new Halloween song, you drop everything, get in the car and go record.”
— Bobby Moynihan

The colorful video features Nina West as the song’s title character, Lisa Frankenstein, a Lisa Frank inspired monster who is trying to navigate her way through high school. The video was filmed entirely in Ohio and local Ohio artist Christian Cimoroni did the Single art.

“Lisa Frankenstein is a celebration of the Halloween season with a Teen monster twist! Said Nina West. “I wanted to imagine what it would look like if Frankenstein and the Bride had a daughter named Lisa! Sure, she has all the awkward attributes of teenage monster, but she is bright, and fun, and celebrates the season the only way she knows how! And yes, I am so lovingly inspired by the incredible art and work of Lisa Frank! Make it a rainbow Halloween!”

“Nina is an impeccable performer and an amazingly hilarious person to boot.” Bobby said. “When Nina calls and asks you to help on her new Halloween song, you drop everything, get in the car and go record. Which is exactly what I did, and I had a blast. I love Nina. Love Halloween. Love the song. Always happy to be part of it. Beware of Lisa Frankenstein!”
The single is out now on all platforms and the video can be seen at the below link:

ABOUT Nina West
Nina West is an American drag queen, actor, and singer based in Columbus, Ohio. She rose to national prominence with her appearance on the RuPaul's Drag Race Season 11, where she placed sixth and won Miss Congeniality. She made history at the 71st Primetime Emmy Awards in Sept 2019 when she became the first ever person to walk the carpet in Full Drag while her season won 5 Primetime Emmys Awards including best Reality Competition Show. In June 2019, New York magazine named West one of the top 100 Most Powerful Drag Queens in America.

West has been performing in central Ohio and around the United States for the last 18 years, doing regional theater and of course, drag. As Nina West, she has produced over 35 main stage production shows. West hosts the annual "Heels of Horror" show at Axis Nightclub, and has also hosted the competition "So You Think You Can Drag?. In 2008, she won the Entertainer of the Year award, and was included in Columbus Business First's "40 Under 40" list in 2018. Nina is a LGBTQ advocate and has raised over $2million for charitable causes in the last decade alone with her charitable foundation The Nina West Foundation.