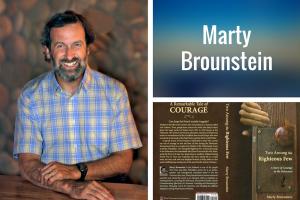 “We're honored to include Marty Brounstein into our BoLAA family.” ~Aurora DeRose

LOS ANGELES, CA, UNITED STATES, October 12, 2019 /EINPresswire.com/ — Marty Brounstein, acclaimed author and keynote speaker, wins Best of Los Angeles Award- “Best Holocaust Book – 2019”, according to Aurora DeRose, award coordinator for the Best of Los Angeles Award community. His powerful book, “Two Among the Righteous Few: A Story of Courage in the Holocaust” features the remarkable story of Frans Wijnakker and his wife Mien, two Catholics, who saved the lives of two dozen Jews in Southern Holland during the Holocaust. His speaking tour with the book is now into its 9th year with over 700 events so far.

The “Best of Los Angeles Award” community was formed four years ago and consists of over 5,600 professional members living and working in Southern California. It celebrates the best people, places and things in Los Angeles with a slogan “No Ads. No B.S. Only the Best.”

“The mission of the community is to celebrate the best of Los Angeles, and allow its community members to connect with other members who share the highest standards of quality and integrity,” expresses DeRose. "We're honored to include Marty Brounstein into our BoLAA family."

“Two Among the Righteous Few” has not always been Marty's main work. For 25 years, he led the consulting firm The Practical Solutions Group, serving a wide variety of clients on issues of leadership and organizational effectiveness. Through this work, he wrote eight books related to business management, from contributing author to sole author, including “Communicating Effectively For Dummies,” “Coaching and Mentoring For Dummies” and “Managing Teams for Dummies.”

However, his 9th book is quite different and special. It has put Marty in the interfaith business, and takes him back to his early career as an educator, when he was teaching history including the Holocaust. This true and remarkable story has a meaningful personal connection as well, which Marty reveals in his engaging storytelling presentations.

Marty has been on an unexpected journey of delivering storytelling presentations to a wide variety of audiences and facilitating book discussions in school classrooms. He started his 9th year of this journey, 710 events with more coming. The events have occurred throughout the San Francisco Bay Area, his home base, and 15 other cities, with New York, Chicago, Los Angeles, Phoenix, Seattle, and Boston among them. The engagements have been in such places as religious institutions, service organizations, personal homes, bookstores, many schools, universities, libraries, and history and Holocaust museums. Furthermore, on this journey Marty continues to study and tell stories about others in the Holocaust involved in resistance and rescue, Jewish and non-Jewish alike. He does so in presentations titled Heroes of the Holocaust.

Marty's keynote presentation and workshop titled “The Courage and Compassion to Do the Right Thing: A Lesson in Making a Positive Difference” continues to grow and has also been well-received at professional conferences and workplaces.

One highlight of Marty’s journey was presenting at the invitation of the Dutch Consulate General of San Francisco in March 2014. He has also been a keynote speaker for Holocaust Remembrance Day events in Chicago, Phoenix, Seattle, and New York and coming up in Reno, NV in April 2020.

Finally, Marty was recently recognized with The Jefferson Award presented by the organization Multiplying Good. They recognize individuals who perform acts of public service and good for America. This honor came about through the nomination by a great supporter of Marty on his journey, Jodie Russi. Jodie was the first teacher to bring Marty into a classroom for a book discussion with her students on this special story.