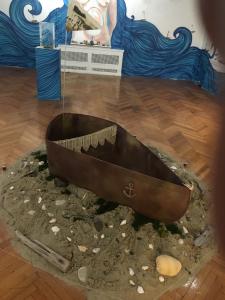 The largest of several boats Mizrachi created for her “Sea: My Journey” exhibit sits on sand and is surrounded by found objects. 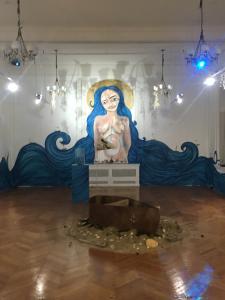 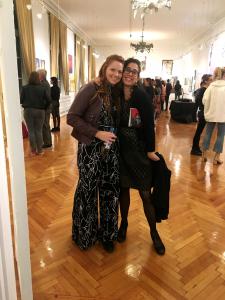 Rutherford, left, and Mizrachi at the “Evolution” opening reception.

October Show in Andrew Freedman Princess and Executive Room Galleries is the ninth all-woman show Mizrachi has curated in New York City since 2006.

Every woman in the show has had a healthy career. Some come from graffiti aesthetic, some from a fine art muralist aesthetic..but all started with the love of street, hip hop and graffiti culture.”
— Alice Mizrachi

BRONX, NEW YORK, UNITED STATES, October 15, 2019 /EINPresswire.com/ — Contemporary female artists are rocking the Bronx this month.
It’s happening at The Andrew Freeman Home, the understated art haven on the Bronx’s Grand Concourse, which this month is hosting two breakout, multi-disciplinary exhibits of works by woman artists.
Renowned muralist and Andrew Freeman Home artist-in-residence Alice Mizrachi is in the center of it all.
The first, “Sea: My Journey,” opened Oct, 4 in the Home’s Executive Room gallery and features the award-winning Mizrachi using various art forms in homage to and examination of the immigrant experience.
The second show, “Evolution: Forging Forward” features work by 18 accomplished mural, street art and graffiti culture artists; Diana McClure, Erotica, Herakut, Imagine, Indie 184, Jane Dickson, Janette Beckman, Jenevieve, Lady K-Fever, Lady Pink, Martha Cooper, Miss Van, Nani Chacon, Pau Quintanajornet, Queen Andrea, Sarah C. Rutherford, Swoon, and Vexta.
Evolution opened October 11 in the Princess Room, the Andrew Freedman’s Home’s large exhibition gallery space.
“Sea: My Journey” is a deeply personal show for Mizrachi. Though she has touched on the issue of immigration often in her work, this is her first show built exclusively around the topic – one she decided she had to address more directly in these contentious times.
“I feel it was really relevant because so many issues around immigration are relevant today,” Mizrachi said. “Immigration and immigrants have been criminalized. In the Sixties everybody was being allowed to enter the United States. So what makes that so different from today?
“Well, I’m a migrant. My family migrated to this country from the Middle East, their families from Morocco and Spain and Russia, so migration and moving through land and sea has been a big thing in my work. I wanted to highlight that and make it so other people feel comfortable telling their stories.”
Mizrachi uses various art forms in the massive show, including a mural, more than a dozen small boats, 11 drawings, a wire installation and a large painting. The exhibit took half a year of planning and is the first time she has shown such a diverse collection in a single show.
The show is also a bit of a family affair.
Her father, Jacob Mizrachi, helped build the boat in the “immersive” installation in the exhibit, which marries the sound of crashing waves with waves painted on the walls around the room and the flotilla of boats, a vital element of so many migrant experiences.
Her mother, Ora Mizrachi, helped construct a crocheted piece and “offered beautiful ideas,” she said.
Mizrachi credits Andrew Freedman Home Director Walter Puryear with “giving me the freedom to do whatever I wanted to express my ideas and passions. It was freeing. I felt like I was in a safe space where I could tell my story and reveal my journey and my ancestors’ journeys through my work.”
The group exhibition, “Evolution,” is the ninth all-woman show Mizrachi has curated in New York City since 2006. Each show has served to spotlight female artists, who are often overlooked in the graffiti genre because of their sex.
“The art world, particularly the graffiti subculture, is dominated by men,” Mizrachi said. “Women have a larger presence in it now, and the importance of our work is more accepted than ever.
Mizrachi knows most of the show participants personally, and those she doesn’t she knows through the art community.
Mizrachi said she learned the importance of working with and fostering other artists in high school, when an art teacher drilled the idea into his students.
“He built a community among us, and by developing that we were really able to exchange ideas, visions and what we wanted,” she said. “It helped me understand what it looks like when your peers are artists.”
That’s why the women in “Evolution” were chosen for the quality of their work and their career arc.
“Every woman in the show has had a healthy career,” Mizrachi said. “Some come from graffiti aesthetic, some from a fine art muralist aesthetic, some from a documentary aesthetic, but all started with the love of street, hip hop and graffiti culture. Some of them have moved away from it, some closer to it, some have gotten world renowned museum exhibitions. It’s nice to see the progression and honor our transitions and evolutions.”
Photographer McClure, has known Mizrachi for over a decade and curated shows with her.
“Women creating a space for their work is very important within urban culture, Hip-Hop and graffiti, ,” McClure said. “So operating as a collective, a community, supporting each other, has just been monumental in terms of moving forward in our individual careers and collectively.”
Rutherford said “I really appreciate how Alice consistently uses her power to uplift women. A lot of these women have been huge inspirations for me artistically, so it is a real honor to show with them.”
“Sea: My Journey” runs through Nov. 4. “Evolution: Forging Forward” will be showcased until Nov. 30.
Gallery hours are 9 a.m. to 7 p.m. Monday thru Friday, 10 a.m. to 5:30 p.m. on Saturday, and closed on Sunday.
For more information, go to www.AndrewFreedmanHome.org, or www.alicemizrachi.com.