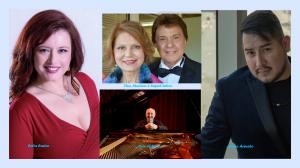 NEW YORK CITY, NY, US, October 16, 2019 /EINPresswire.com/ — On Tuesday evening November 12 vocalists Celia Castro, Ilya Martinez, Mario Arevalo and Rafael Lebron will join forces with pianist Max Lifchitz for an intimate celebration of the Art Song as practiced in the Caribbean and Latin America during the last 100 years.

The free-admission event will be held at the National Opera Center's Marc A. Scorca Hall located at 330 Seventh Ave (FL 7) in New York City. The auditorium is ADA accessible. The concert will start at 8 PM and end around 9:30 PM. No tickets required.

The four vocalists and Mr. Lifchitz are available for media events and interviews and may be contacted through the North/South office.

The event is possible in part with public funds granted by the NYS Council on the Arts and the NYC Department of Cultural Affairs as well as gifts from many generous donors.

Celia Castro, soprano, is the winner of the NYSTA Young Artists Competition and the Clarisse Kampel Foundation Prize. She has appeared in copious opera and zarzuela productions throughout New York City, Puerto Rico and the Dominican Republic. She has also participated in concerts sponsored by the Caramoor Festival Bel Canto Program and the Association of Dominican Classical Singers.

Soprano Ilya Martinez has been praised by the press as “a communicative artist who phrases her melodic lines alluringly" and "is as attractive to look at, as she is to listen to.” She has appeared on concert and operatic stages throughout the US and Latin America. She is the recipient of many awards and honors including those from the Institute of Puerto Rico, the Latin-American Cultural Center, Puerto Rican Association of Queens and the National Congress of Puerto Rican Women.

Mario Arevalo, tenor, has been praised by the press as having "a beautiful instrument, an effortless tone, and a warm Latin sound that helps to put a song across." The winner of the first prize in the 2017 Mario Lanza/Elaine Malbin Competition in NYC, Mr. Arevalo was also honored with Costa Rica's Melico Salazar Award and a prize in the New Hampshire Opera Idol Competition. His recent appearances include those with the New York City Opera, the Hawaii Opera Theater, Peru's Trujillo International Competition and the San Vicente Opera Festival in his native El Salvador.

Baritone Rafael LeBron has performed over eighty-five different roles in opera, operetta and zarzuela performances throughout the US, Europe, Israel and Latin America. An ardent advocate for the music of Puerto Rican composers, Mr. LeBron has appeared in premiere performances and recordings of operatic works by Rafael Aponte-Ledee, William Ortiz and Roberto Sierra. The founder and director of Operatic & Concert Artists, LeBron has produced many concerts in Puerto Rico featuring important international artists.

Pianist Max Lifchitz has appeared on concert stages throughout Europe, Latin America and the US. The San Francisco Chronicle described him as "a stunning, ultra-sensitive pianist" while the New York Times praised him for his "clean, measured and sensitive performances." Lifchitz appears as collaborative artist and conductor in over sixty compact disc albums, including nine widely praised solo albums featuring piano music from the Americas.

Since its inception in 1980, the North/South Consonance, Inc. has brought to the attention of the New York City public over 1,000 works by composers hailing from the Americas and elsewhere representing a wide spectrum of aesthetic views. Its activities are made possible in part, with public funds from the New York State Council on the Arts and the New York City Department of Cultural Affairs. Additional support provided by the Women's Philharmonic Advocacy, the Music Performance Trust Fund as well as the generosity of numerous individual donors.

To stream, download and/or purchase the more than 60 compact discs released by the
North/South Recordings label
please go to