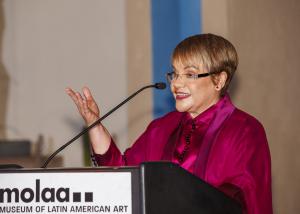 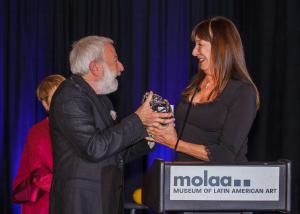 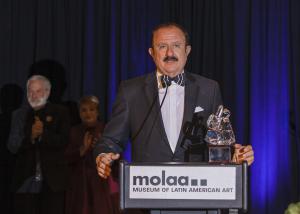 “The LEGADO Award aims to build recognition of the outstanding careers of Latin artists and philanthropists who have had a deep impact in arts and culture globally and who have used their knowledge and influence to create a better world,” said Lourdes I. Ramos-Rivas, Ph.D., President and CEO of MOLAA.

Coinciding with the annual Gala, Robert Graham’s Civic Monuments exhibition made its debut at MOLAA. Curated by Noriko Fujinami, the exhibition showcases several maquettes and photographs, providing an intimate view of Graham’s impact on communities throughout the United States. It is the first time all seven maquettes have been presented together in one exhibition.

The Annual Gala at MOLAA is the Museum’s signature fundraising event. All proceeds directly benefit upcoming exhibitions and educational programming. This year’s Gala was a success, raising over $300,000 thanks to the generosity of all those in attendance. MOLAA’s Gala was made possible by the Museum’s Board of Directors, Gala Committee – led by Gala Chair Randy Gordon, the Robert Gumbiner Foundation, Thank Goodness It’s Sofia (TGIS) Catering, the Port of Long Beach, AES, Don Temple Storage, the City of Long Beach, Long Beach Convention & Visitors Bureau, Long Beach Chamber of Commerce, among others.

Philanthropic contributions made by members and individual donors allow MOLAA to continue strengthening its mission of expanding knowledge and appreciation of contemporary and modern Latin American and Latino Art on an international level.

About the Museum of Latin American Art (MOLAA)

The Museum of Latin American Art (MOLAA) is the pioneering museum in the United States dedicated to modern and contemporary Latin American and Latino art. Founded in 1996 by Robert Gumbiner, MOLAA houses a collection of more than 1,600 works of art including paintings, sculptures, drawings, mixed-media, photographs, and video art. The Museum is a multidisciplinary institution committed to providing a platform for cross-cultural dialogue through the arts, educational programs and events for the community.

About the LEGADO Lifetime Achievement Award

As part of the Museum’s vision, the Museum of Latin American Art (MOLAA) aims to build recognition of the outstanding careers of Latin artists who have had a deep impact in arts and culture globally and who have used their fame to create a better world. With this in mind, MOLAA created LEGADO: A Legacy for the Arts. LEGADO honors renowned Latin American and Latino artists who nurture and champion emerging artists. LEGADO awardees are diverse artists, who, having made their own indelible marks, are exemplary in their dedication to sharing their profound knowledge and experience with promising creative talent. Great artists realize that their gift comes with the duty to give back; to hold the door through which they have entered the art world open to the next generation of talent.

About the LEGADO Philanthropy Award

The Museum of Latin American Art (MOLAA) created the LEGADO Philanthropy Award as a compliment to the original LEGADO: A Legacy for the Arts Award. As a nonprofit institution, MOLAA has a deep understanding of the needs of arts organizations around the globe. This award seeks to recognize Latino individuals who have made their mark on the world through their generous philanthropic giving. LEGADO awardees are leaders – serving as inspirations to those around them, exercising thoughtfulness and foresight, and encouraging others to follow in their footsteps. The LEGADO Philanthropy Award honors those who are passionate about creating a better world today and serve as models for the next generation of philanthropists.

Robert Graham (1938-2008) was born in Mexico City and studied at San Jose State University (B.A., 1963) and San Francisco Art Institute (M.F.A., 1964). Graham’s work is represented in the collections of the Museum of Modern Art, New York, the Whitney Museum of American Art, New York, Los Angeles County Museum of Art, San Francisco Museum of Modern Art, and over twenty other museums worldwide. Commissioned sculptural installations include The Great Bronze Doors of the Cathedral of Our Lady of the Angels, Los Angeles, the Charlie Parker Memorial in Kansas City, Missouri, and the Duke Ellington Monument in New York City, and the FDR Memorial in Washington DC.

Graham, well-known for his monumental bronze sculptures and civic monuments, had previously worked in fired clay. Like many sculptors, his ceramic sculptures convey a direct relationship to his other works and for Graham, the pieces continue his investigation of the female form.

Mr. Trujillo is an international business executive with three decades’ experience as CEO of large market cap global companies in the US, the EU, and Asia-PAC.