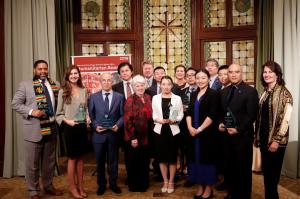 No matter our faith traditions it is vital that we all stand together to support human rights and freedom for all peoples by seeking to expose the atrocities and abuses against our fellows.”
— Rev. Susan Taylor, Church of Scientology National Affairs Office

WASHINGTON, DC, USA, October 23, 2019 /EINPresswire.com/ — In an effort to pressure US government agencies to stop the import of goods created with Chinese slave labor, a coalition of 37 religious and human rights organizations signed a letter calling for action by the Acting Commissioner of the US Customs and Border Protection (CBP), Mark A. Morgan.See the letter below.

The letter urged CBP to issue a Withhold Release Order banning the import of all Chinese cotton, textile and apparel products tainted by forced labor in China especially those from the Xinjiang Uyghur Autonomous Region in northwestern China. It has been reported that there are over a million Uyghur Muslim ethnic men and women reported to have been forced into labor and re-education camps. https://www.citizenpowerforchina.org/single-post/2019/08/27/Report-Released-Cotton-The-Fabric-Full-of-Lies

Withhold Release Orders are issued by US agencies to prevent goods suspected of having been made by forced labor from entering the United States.

The letter follows many actions being initiated by faith groups in Washington, DC, and elsewhere. Last week the National Affairs Office of the Church of Scientology (www.scientologyreligion.org) presented their 2019 Humanitarian Awards to five organizations of the China Coalition to Advance Religious Freedom: The Uyghur Human Rights Project, Citizen Power Initiatives for China, China Aid, The Falun Dafa Association of Washington, DC, and The Church of Almighty God. All of these organizations, participants of the International Religious Freedom Roundtable, are campaigning worldwide to bring awareness of the atrocities being leveled against their respective family members, friends and colleagues still remaining in China.

Rev. Susan Taylor, signing the letter on behalf of the Church of Scientology National Affairs Office, remarked, “No matter our faith traditions it is vital that we all stand together to support human rights and freedom for all peoples by seeking to expose the atrocities and abuses against our fellows.
We asked that all people of goodwill join in raising awareness on this vital issue. The following letter is just one avenue being used to help do this.”

There is significant evidence of China’s systematic use of forced labor in Xinjiang and other parts of the country. This forced labor is used in the production of cotton, textiles, and apparel products, which are being imported into the United States. The undersigned organizations are writing to urge you to issue a Withhold Release Order ("WRO") against all cotton, textile, and apparel products from China.

Citizen Power Initiatives for China, one of the undersigned organizations in this letter, has recently released a report entitled, “Cotton: The Fabric Full of Lies: A Report on Forced and Prison Labor in Xinjiang, China, and the Nexus to Global Supply Chains,” in which it uses direct evidence from data published by the Chinese government, Chinese companies, and witness testimonies to show that China, the world’s largest cotton producer, has built the world’s largest forced labor system to provide the workers needed to sustain its cotton production. This “cotton gulag” is primarily based in Xinjiang, home to most of China’s Uighers and other Muslim ethnic groups, where 84 percent of China's cotton output is produced.

It is China’s long-standing policy to use prison inmates as forced labor, and since the Chinese Communist Party(CCP) took power it has been shipping prisoners from the interior of China to Xinjiang to do hard labor and “contribute to Xinjiang’s economic development” in the harsh desert environment. Xinjiang now has the highest percentage of prisoners per capita in China. Excluding Uighur re-education camps, there are over 80 prisons in Xinjiang compared to a mere 25 prisons in Shandong Province, despite the latter having a population over four times larger.

In 2014, the Chinese Government began to implement a strategy to further suppress Uighurs in Xinjiang. Part of the strategy involves the detention of large numbers of Uighurs in so-called “re-education camps” or “vocational training centers.” Observers estimate that China has detained over 1 million Uyghurs in this system that is intended to cleanse Uyghurs of their ethnic identity and make them loyal to the Communist Party.

Meanwhile the Chinese Government launched an initiative to spur the development of the vertical integration of China’s garment manufacturing sector by moving textile and garment factories closer to cotton production in Xinjiang where Uyghurs could be placed for employment in the cotton/textile/garment industry. Chinese companies involved in textile and apparel production in Xinjiang use these camp inmates to work in their production facilities.

Since 2014, around 2,200 new cotton/textile/apparel companies have been set up to participate in the program. Xinjiang Lihua Cotton Company, a prison enterprise, boasted that they added 8000 new Uighur workers annually. Huafu Fashion and Lutai Textile, both suppliers for international brands such as Target, Burberry, Calvin Klein, Hugo Boss, Armani, Gucci, Olymp, and Uniqlo, have also been active participants in the government program. As of 2018, China documented the new employment of 450,000 Uighur workers from impoverished households, relatives of the convicted and detained, and reeducation camp inmates.

The United States has the world’s most stringent law, the Tariff Act of 1930 as amended by the US Trade Facilitation and Trade Enforcement Act of 2015 ("TFTEA"), when it comes to protecting against the importation of goods made with forced labor. Additionally, the U.S. and China signed two bilateral diplomatic agreements in the 1990s to address U.S. Congressional concerns over China’s forced labor issue: a 1992 “Memorandum of Understanding” (MOU) that laid out general principles for stopping bilateral trade in prison labor goods; and a 1994 “Statement of Cooperation” (SOC) that established more specific procedures for site inspections at prison labor facilities suspected of producing goods for export.

In the case of Xinjiang, the evidence is clear. Forced labor is used so ubiquitously throughout Xinjiang that it is difficult to separate Xinjiang’s forced labor economy from its regular economy. And because Xinjiang is by far the major supplier for China’s apparel supply chain, the U.S. government must assume that any cotton products sourced from China are a product of China’s cotton gulag.

Recently U.S. Customs and Border Protection issued a Withhold Release Order on all cotton and products made from cotton that was harvested in Turkmenistan. We believe the same standard should apply to products made by forced labor in China. We therefore urge you to fully enforce the ban on the importation of goods made with forced labor by banning all cotton, textile, and apparel products from China.