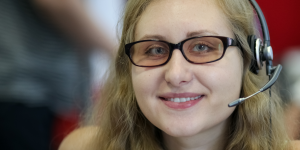 Call Center Agent Awaiting the Next Call in Her Queue.

In 2007, a concern was American jobs moving overseas as part of offshoring to save cost. There was a solution available right in our own backyard.

In our experiences we see an increase in remote opportunities and the desire of people wanting them to increase. There can be a lot of advantages for people with disabilities to do their work at home.”
— Alan Hubbard, Chief Operating Officer at NTI

BOSTON, MA, UNITED STATES, October 23, 2019 /EINPresswire.com/ — Dire predictions of white-collar jobs following factory jobs overseas failed to materialize, according to an Upwork study. Back in 2007, economists were saying there was the possibility of a quarter of a million jobs ending up being sent overseas.

This forecasting came on the heels of the first part of the 21st century seeing manufacturing jobs being outsourced to other countries. American businesses were expected to see the cost savings of operating in other parts of the world and expand offshoring efforts in other jobs.

With the explosion of remote work opportunities and advances in technology, though, companies found it to be a better option to stay in the United States. Americans embracing work at home opportunities and the cost savings it has led for companies were other factors in the prediction not coming true.

“Where in retrospect I missed the boat in thinking that the gigantic gap in labor costs between here and India would push it to India rather than to South Dakota,” said Alan S. Blinder, a Princeton economist and official in the Clinton administration to the New York Times. “There were other aspects of the costs to moving the activities that we weren’t thinking about very much back then when people were worrying about offshoring.”

In March of 207, Blinder wrote a report about “How Many U.S. Jobs Might be Offshoreable?” He didn’t estimate how many actual jobs were going to be headed overseas, but wrote potentially, it could have been 22 to 29-percent. At the time of the report, Blinder said the amount of jobs already overseas at the time wasn’t available.

In Blinder’s 2007 report, he looked at 291 occupations and ranked them by their offshorability. Computer programmers and data entry keyers were rated as top professions that could be sent overseas. Instead of sending those and other types of white-collar jobs overseas, American companies turned them into remote opportunities.

“Interestingly, those are two professions that can be done remotely,” said John Bertram, Director of Operations at LandAjob. “At the time (of Blinder’s report), we were still developing the technology to allow that to happen. People who worked in offices and white-collar jobs were afraid their jobs would be the next ones to go overseas.” LandAjob is a nonprofit organization, helps Americans with disabilities collecting SSI or SSDI, find job opportunities.

Adam Ozimek, an economist at Outlook, said remote work opportunities have given American more freedom and flexibility, eliminating or shortening commuting times and redistributing jobs in the United States. Instead of doing their job in an office in New York City, technological advances allow the worker to be based in rural areas, which is a benefit to the economies there. Upwork works with freelancers and companies to find employment opportunities. The report can be read at http://laj.work/OffshoreFearReport

According to the Upwork report, which used census figures, United States companies opted to keep the work in this country instead of going overseas to take advantage of a talented workforce, which provides savings to them.

“In our experiences we are seeing an increase in remote opportunities and the desire of people wanting them to increase,” said Alan Hubbard, Chief Operating Officer at NTI. “There can be a lot of advantages for people with disabilities to do their work at home. There are also cost savings to the employees and the employer that are factored in.”

NTI is a nonprofit based in Boston that helps individuals with disabilities attain work-at-home call center, customer service, and IT help desk roles across the United States.

NTI has found that call centers have been replacing brick and mortar employees with remote employees within the US. “Hiring within the United States through our NTI@Home division not only gives you qualified and trained agents, but also provides loyal employees who have a regional dialect. NTI has found that typical agents stay within a position for a minimum of four years. Lower attrition means lower training costs and a higher level of customer service,” said Michael Sanders Director of Marketing at NTI. In addition, the remote employees have their own equipment and accommodations which reduce or remove the costs a physical call center would incur. We encourage companies to connect with us about exploring remote solutions to hire individuals with disabilities.

As technology continues to develop and hiring managers become even more accepting to working from home, we will see continued growth in remote opportunities. The Upwork reports also points out the technology runs both ways. They say Americans workers are in demand for overseas remote working opportunities.

“International companies have slowly been approaching NTI@Home about hiring agents in the United States to augment their call center. They want the quality, experience, and reliability that our candidates can bring,” Michelle Simone, Senior Director of Client Services at NTI@Home stated. “Collectively, international companies make up one-third of the clients that we are recruiting for. That’s approximately 300 individuals.” Those interested applying for remote jobs through NTI@Home should visit http://disability.one/RemoteJobsReg.