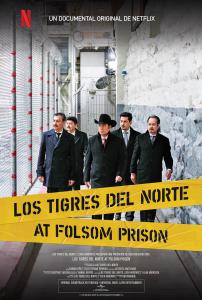 In conjunction with the screening, MOLAA will exclusively debut a special exhibition of behind-the-scenes photographs, taken by award-winning photographer Lance Dawes, of Los Tigres del Norte’s historic visit to Folsom from Friday, November 15 through Sunday, November 17. The screening on November 17 will be followed by a Q&A with Lance Dawes and the documentary’s co-producer, Zach Horowitz. The documentary captures the legendary band’s trip to Folsom Prison in 2018, 50 years after Johnny Cash’s famous concert there. More than a concert film, the documentary is a journey into the world of Latino incarceration told through the songs of Los Tigres del Norte and interviews with Latinx inmates at Folsom. It’s been called one of the best new documentaries on Netflix by the Washington Post, the New York Daily News and Buzzfeed, just to name a few. The documentary is sixty minutes long, in Spanish with English subtitles.

Los Tigres del Norte is one of the most important and popular bands in the history of Latin music. Often called “the voice of the voiceless," they have sold over 40 million albums, have had 50 #1 chart-topping singles. After five decades, the band continues to sell out concerts across the U.S. and Latin America.

The exclusive photography exhibit features the work of Lance Dawes, the only photographer allowed to accompany the band on their visit to the prison. Best known for his work as a documentary and editorial photographer, for almost thirty years Dawes has chronicled virtually every aspect of the action sports industry as well as the music and entertainment industry. His credits include Slap Magazine (which he founded and where he was the editor, art director and chief photographer), Thrasher, ESPN.com, the Washington Post, the Associated Press and Juxtapoz Magazine. His work has appeared in campaigns for Sketchers, Vans, Panasonic, Fossil Watches and Nike and many others, as well as on album covers for Universal, Warner and Atlantic Records. He has photographed everyone from the Beastie Boys to Robert De Niro, Al Pacino and Clint Eastwood. His work has been included in photography exhibits around the world.

Some of the photographs included in the exhibit will be available for purchase, with all proceeds benefiting MOLAA.

There will be food trucks and a cash bar available on-site for the screening. The documentary will be screened in MOLAA’s Viva Event Center. This event is free and open to public. MOLAA is located at 628 Alamitos Ave. in Long Beach, California. For more information about this event, please visit https://molaa.org/ or call (562) 437-1689.

About the Museum of Latin American Art (MOLAA)

The Museum of Latin American Art (MOLAA) is the pioneering museum in the United States dedicated to modern and contemporary Latin American and Latino art. Founded in 1996 by Robert Gumbiner, MOLAA houses a collection of more than 1,600 works of art including paintings, sculptures, drawings, mixed-media, photographs, and video art. The Museum is a multidisciplinary institution committed to providing a platform for cross-cultural dialogue through the arts, educational programs and events for the community.