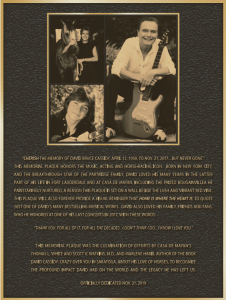 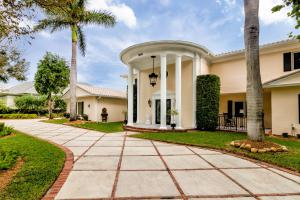 Casa de Mayan, former home of David Cassidy and now a luxury rental villa, is mounting a special bronze plaque by his Bougainvillea on Nov. 21, 2nd anniversary of his passing, to forever associate him with the mansion. 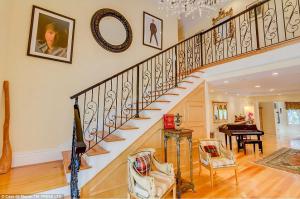 David Cassidy’s former home, Casa de Mayan, purchased in 2015 by two Maryland businessmen, features many of his memorabilia and furnishings as a luxury rental.

Custom-made, 2-footx18-inch plaque installed at entertainment icon's former estate in Florida, on an outside wall near his beloved Bougainvillea Arched Vine.

A beautifully crafted plaque with 3 stunning pictures of David Cassidy and a heartfelt inscription will make everyone aware of how much he enjoyed Casa de Mayan and the loving care he put into it.”
— Thomas L. White

FORT LAUDERDALE, FLORIDA, UNITED STATES, November 6, 2019 /EINPresswire.com/ — On November 21, 2017, the world lost one of the most lauded entertainment icons of the 1970s and a voice for a generation: David Cassidy passed away at Broward Medical Health Centre in Fort Lauderdale, Fla., from organ failure at age 67.To mark two years since Mr. Cassidy’s sudden passing, he’ll be honored November 21, 2019, with a special installation to permanently mark his impact on Fort Lauderdale and, in particular, Casa de Mayan: the luxury villa he made his home for much of the latter part of his life.

A special, custom-made bronze plaque – featuring a photo of Mr. Cassidy at three important stages in his life, and an inscription outlining his impact on music, acting and the horse-racing industry – will grace an exterior wall of his former home in the exclusive Harbor Beach neighbourhood of Fort Lauderdale.In 2015, the 7,000-square-foot mansion was purchased by business partners Thomas L. White and Scott V. Watkins, M.D., and renovated extensively. It has been a luxury rental ever since, welcoming visitors as well as fans from around the world.The plaque is 24 inches (2 feet) long and 18 inches wide, and crafted by Impact Signs, a leading architectural sign company in LaGrange, Ill. It was made possible through the generosity of Mr. White and Dr. Watkins. Canadian journalist Marlene Habib, author of the book David Cassidy: Crazy Over Youin Saratoga about his career in horse racing, designed and created the plaque. It will permanently associate Mr. Cassidy with the home he purchased in 2001, first living there with his then-wife Sue and son Beau, and later on his own.

He called Casa de Mayan the most favorite of all the homes he ever owned. In part, the inscription on the plaque reads: “Cherish the memory of David Bruce Cassidy, April 12, 1950, to Nov. 21, 2017 … but never gone. This memorial plaque honors the music, acting and horse-racing icon born in New York City and the breakthrough star of The Partridge Family, David loved his many years in the latter part of his life in Fort Lauderdale and at Casa de Mayan, including the prized Bougainvillea he painstakingly nurtured, a reason this plaque is set on a wall beside the lush and vibrant vine. David also lovedhis family, friends and fans, and honored the fans especially at one of his last concerts in 2017, with these words: "Thank you. For all of it. For all the decades. I don’t think I love you … I know I love you.”

As part of honoring Mr. Cassidy as well, the gates of Casa de Mayan will be open from 9 a.m. to 5 p.m. ET on Thursday, Nov. 21, so fans, who meant so much to him, and media can see the memorial plaque after it's installed.Mr. White says a driving force for the memorial plaque is to emphasize to anyone coming to Casa de Mayan how much he loved the home,including the Bougainvillea Arched Vine adorning the front driveway area of the property.

Mr. Cassidy acknowledged in a media interview at the time he was selling the home that he hoped the new owners would put loving care into his Bougainvillea, which he estimated was 50 years old: “I put so much time and love and energy into this.” Mr. White took those words to heart, telling Mr. Cassidy while the superstar was showing him around the property that he’d always ensure the massive ornamental vine would be nurtured with love.“It’s a promise I’ve kept to him to this day,” says Mr. White. “Now a beautiful, superbly crafted plaque with three stunning pictures of David and a heartfelt inscription will make everyone aware of how much David enjoyed his home and the loving care he put into it. And David still has millions of fan.”

Born to actors Jack Cassidy and Evelyn Ward, Mr. Cassidy’s acting and singing breakthrough came on the landmark 1970s TV show The Partridge Family. He portrayed Keith, the eldest of five children who along with their mother (played by Shirley Jones, his real-life stepmother),became a popular singing group. Mr. Cassidy also performed solo at sold-out shows around the world, recorded over 20 albums, and went on to have an illustrious career in other TV shows, and in film and theatre. Mr. Cassidy was a multi-faceted man: an entertainer, but also a humanitarian who loved his family, friends and fans, says Ms. Habib, adding: “A big part of his life and happiness was his love of horses – it was a lifelong passion he developed as a child. He bought his first horse shortly after joining The Partridge Family, and soon made an impact on the horse-racing industry, winning important races and raising funds for animal causes.” Mr. Cassidy also threw his celebrity behind the fight against Alzheimer’s – his mother Evelyn died of the brain disease in 2012, and he himself was diagnosed with a form of dementia just months before his passing. For those reasons, Ms. Habib has donated proceeds from the two editions of her 2018 Kindle Publishing book David Cassidy: Crazy Over You in Saratoga (available on Amazon and in the gift shop of the National Museum of Racing and Hall of Fame in Saratoga Springs, N.Y.) to a charity he supported: the Alzheimer’s Research and Prevention Foundation.

The mansion features many of Mr. Cassidy’s personal memorabilia, including autographed photos, a huge coffee table he purchased in California, and a gorgeous set of doors he rescued from a church in Mexico that was to be demolished.

MEDIA CONTACTS:For more on Casa de Mayan (1600 S. Ocean Dr., Fort Lauderdale, 33316)and the unveiling of the David Cassidy memorial plaque on Nov. 21, 2019, and to arrange visits to the property and/or interviews, contact:Kevin White, Manager and Host at: casademayan1600@gmail.comor mrkdwhite@suddenlink.net,or call 304-627-5870.Marlene Habib, davidcassidysaratogabook@gmail.com, or call416-894-4625.