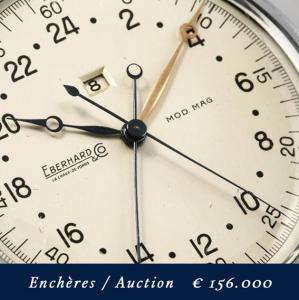 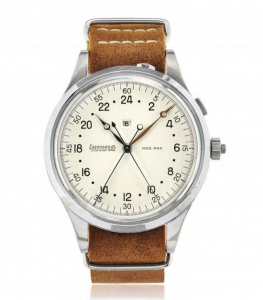 The “Sistema Magini” by Eberhard & Co. in its “Mod. Mag.” version was a pole of attraction at the recent Bolaffi auction where it was assigned at 156,000 euros

The constant research, the innovation and the care for details live in our creations. Always. Go through our history and live the emotion of a brand that has been marking time for over 130 years.”
— Eberhard & Co

NEW YORK CITY, NY, 10162, November 6, 2019 /EINPresswire.com/ — The famous Eberhard & Co. split-seconds chronograph, produced in the early 1940s and instrumental for the success of an epic Italian Air Force mission, was named after the heroic pilot to whom it was issued, Publio Magini.

The chronograph was, in fact, at the centre of a relatively unknown episode of the Second World War, the round trip Rome-Tokyo flight of 1942. In that period, the Axis powers were unable to communicate via radio because their secret codes had been deciphered by the Anglo-Americans. Italy, Germany and Japan therefore decided to connect the three countries with a regular flight with the aim of exchanging strategic information. The Italians were the only ones to succeed in this secret mission, thanks in part to this timepiece that became one of the key instruments in air navigation at the time.

The watch auctioned at Bolaffi is a sensational discovery, being only the second model of the Magini Chronograph that has been found, after the prototype used during the military mission, which is now owned by an important collector.

The exceptional value assigned to the “Mod. Mag.” during the Bolaffi auction is a tribute to the history of Eberhard & Co., recently represented in the new Museum at La Chaux-de- Fonds, which has already become an unmissable destination for watch lovers from around the world.

About Ebehard & Co
Founded in La Chaux-de-Fonds in 1887 by Georges-Lucien Eberhard, the Swiss watchmaking Maison Eberhard & Co. has a long and unbroken history, as well as a name resolutely synonymous with tradition, commitment and innovative spirit. Research, excellence and innovation are the values on which the company has based its philosophy, without renouncing the deep connection with its origins and traditions.