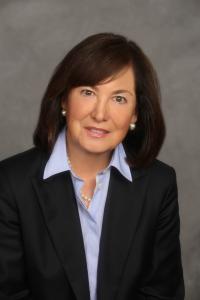 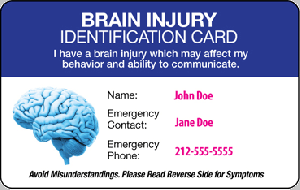 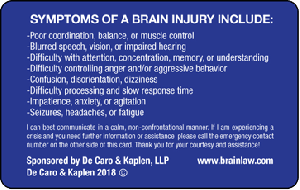 The response since we launched the initiative in 2017 has been overwhelming, with over 15,000 Americans now carrying a personalized brain injury identification card.”
— Shana De Caro

The card — which was introduced by New York brain injury lawyers De Caro & Kaplen, LLP, in 2017 — includes the individual's name, a designated emergency contact, and common symptoms of a brain injury.

According to De Caro & Kaplen, the card is now carried by over 15,000 Americans, spanning all 50 states. Shana De Caro, a senior partner in the firm and secretary of the Brain Injury Association of America, says that the feedback the firm has received from recipients affirms their belief that a brain injury card was needed, “The response since we launched the initiative in 2017 has been overwhelming, with over 15,000 Americans now carrying a personalized brain injury identification card. While there were already cards available for individuals with conditions such as epilepsy and diabetes, we felt a specific brain injury card was needed. The huge number of applications, and the daily positive feedback we receive from recipients of the card, affirms our belief.”

Shana De Caro, who was recently nominated to serve as president of the National Trial Lawyers, Top 25– Brain Injury Trial Lawyers, says that these symptoms, and the “invisible” nature of the injury can lead to difficult encounters with authorities, “Traumatic brain injury is often called ‘the invisible injury’ as to an outside observer there may be no physical signs of disability. Symptoms such as slurred speech and irritability can be incorrectly interpreted by law enforcement as an individual being under the influence of drugs or alcohol, or even having criminal intent. As many individuals have difficulty explaining their condition, this can lead to inappropriate arrests.”

A recent review, posted publicly on De Caro & Kaplen’s Google business page, describes how presenting a brain injury ID card helped defuse one such situation, “I was the passenger of a car that got pulled over for speeding. The officer came to my side of the car and asked for my information. Legally, i know I'm not required to surrender my documents, as i am not the driver. I presented my TBI card to the officer, explained that i have epilepsy and don't want to have an episode, could he please turn off his emergency lights. After he received the driver's info, he went back to the squad car and turned them off. This card saved me the hassle of the officer suspecting me of any crime. thank you!”

The Brain Injury Identification Card is provided free of charge by De Caro & Kaplen to any individual who has experienced a brain injury in the USA, and is available to order on the firm’s website at https://brainlaw.com/brain-injuries/card/.