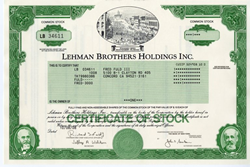 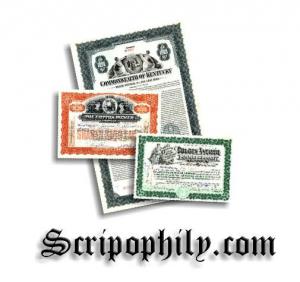 Scripophily – The Gift of History 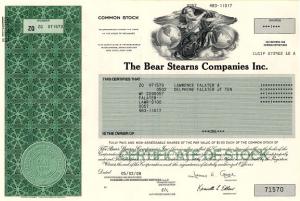 FAIRFAX, VIRGINIA, UNITED STATES, November 27, 2019 /EINPresswire.com/ — Scripophily.com® / RM Smythe®, the Internet’s largest buyer and seller of collectible stock and bond certificates is now offering original Lehman Brothers Holdings, Inc., Original Lehman Brothers Holdings, Trump Taj Mahal Funding, Countrywide CMO's and Bear Stearns Stock Certificates. The Lehman Brothers Certificate was printed by the United States Banknote Company and has an ornate border around it with vignettes of an early street scene with the capitol in the background (Below this image it says "Founded 1805, Montgomery Alabama"), and portraits of Mayer Lehman and Emanuel Lehman. This item has the printed signatures of the Company’s Chairman, Richard S. Fuld, Jr., and Secretary.

The Bear Stearns Companies Inc. certificate was issued in 2008. This historic document was printed by United States Banknote Company and has an ornate border around it with a vignette of an allegorical woman next to two globes. Tri folded from original mailing. This item has the printed signatures of the Company's President, James E. Cayne and Secretary, Kenneth L. Edlow.

Lehman Brothers Holdings Inc. was a global financial-services firm who faced unprecedented losses due to the continuing subprime mortgage crisis and filed for Chapter 11 bankruptcy protection on September 15, 2008. The filing marked the largest bankruptcy in U.S. history. Stock certificates from this company are very difficult to find and are extremely collectible.

The Bear Stearns Companies, Inc., based in New York City, was one of the largest global investment banks and securities trading and brokerage firms prior to its collapse in 2008. The main business areas, based on 2006 net revenue distributions, were: capital markets (equities, fixed income, investment banking; just under 80%), wealth management (under 10%) and global clearing services (12%). Beginning in 2007, the company was badly damaged by the nationwide credit crisis. In March 2008, the Federal Reserve Bank of New York provided an emergency loan to try to avert a sudden collapse of the company. The company could not be saved, however, and was sold to JPMorgan Chase for ten dollars per share, a price far below what the stock had traded for before the crisis, although not as low as the two dollars per share originally agreed upon by Bear Stearns and JP Morgan Chase.

Scripophily (scrip-ah-fil-ly) is the name of the hobby of collecting old stock and bond certificates. Certificate values range from a few dollars to more than $1,000,000 for the most unique and rare items. Tens of thousands of Scripophily buyers worldwide include casual collectors, corporate archives, business executives, museums and serious collectors. Due to the computer age, more and more stock and bonds are issued electronically which means fewer paper certificates are being issued. As a result, demand for paper certificates is increasing while supply is decreasing.

Scripophily.com has had items on loan for display in the Smithsonian's Museum of Financial History in New York and has also partnered with the Museum of American Finance on stock giveaways for New York area teachers and students.

Scripophily,com has been featured on CNBC, USA Today, Associated Press, Reuters, Nightline, Today Show, Baltimore Sun, and Washington Post and in many other media publications. Scripophily.com offers the World’s #1 old stock research service at OldCompany.com and offers high resolution scans for publications and has over 16,500 selections on its website.

Scripophily.com/Old Company Research Service (RM Smythe), founding member of the Old Stock Exchange, is the successor company to all material published by the Marvyn Scudders Manuals, the Robert D. Fisher Manuals, R.M. Smythe Stock Research Service, and the Herzog & Co., Inc. obsolete research services. These services have been performed continuously for over 139 years since 1880. We are the leading provider of authentic stock certificates, autographs, and old company stock research services.

Scripophily.com and Old Company Research Services was founded by Bob Kerstein (Bob.com). Bob is a CPA and CGMA, and has more than 42 years of senior management experience in the Cellular, Cable TV, Satellite, Internet, Professional Sports and Entertainment Industries. Bob is also the President of the Professional Scripophily Traders Association (PSTA).

Bob Kerstein speaking at the Museum of American Finance, an affiliate of the Smithsonian Institution