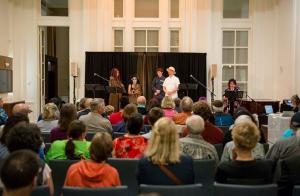 The L. Ron Hubbard Theatre performs final show of the year at the Scientology Information Center.

CLEARWATER, FLORIDA, UNITED STATES, December 5, 2019 /EINPresswire.com/ — On Saturday, November 30th the L. Ron Hubbard East Coast Theatre completed its final show for the year with the double feature performance of Battle of Wizards and The Planet Makers. Not only did they awaken the imaginations of the audience, but they also provided sound lessons of harmony, respect, and inclusion.

The show was performed before a packed house with guests from 8 to almost 80 years old, and where they all shared a love of well-told stories, action, and adventure. A combination of lights, unique costumes, make-up, sound effects, and well-rehearsed actors brought the stories to life.

"Even though these stories are about faraway planets in distant galaxies, they are dealing with issues that we face right here in this world today among people from different backgrounds," said Amber Skjelset, Manager of the Scientology Information Center. "In the stories, they solve their problems and set things right in the end. I believe that these stories are not only exciting to watch – but they also deliver a message of tolerance and respect for one another, and that's what the holidays are all about."

The theatre's producer, Ms. Joanie Sigal remarked, "In 1920, radios first became popular in homes across America. This was followed by a surge of radio-styled entertainment which brought families together. The L. Ron Hubbard East Coast Theatre is carrying on a rich tradition nearly a century old reminding all generations of the value of storytelling and using one's imagination."

One attendee who brought his family to the show remarked, "The use of imagination to travel to remote planets was something my teenage granddaughters and I found pleasing. Exercising the mind was a wonderful experience for them. Thank you for a wonderful show and for your service to the community."

L. Ron Hubbard was among the most prolific and popular writers through the Golden Age of Pulp Fiction. Indeed, between 1934 and 1940, some 140 L. Ron Hubbard tales appeared in the pages of legendary pulp magazines—often as many as three titles an issue and bylined under some fifteen pen names. With 19 New York Times bestsellers and more than 350 million copies of his works in circulation, Mr. Hubbard is among the most acclaimed and widely read authors of our time.

The Scientology Information Center, located in the Historic Clearwater Building in downtown Clearwater, opened on July 11, 2015, and currently houses a gallery of audiovisual displays with some 400 videos. The Center is open to all and provides a self-guided tour showing basic Scientology beliefs, Churches around the world, ongoing social programs and the life of L. Ron Hubbard, Scientology's founder. The Center offers tours to the broad public and civic leaders; holds concerts, theatrical performances, and receptions for the community.